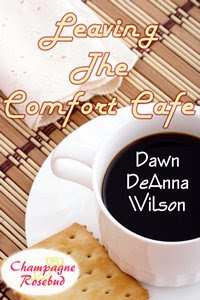 Blythe makes a perfect score on her SAT, earns a full scholarship to Cornell, but never goes. Instead, she becomes a waitress at the Comfort Café, a “Mom and Pop” restaurant in Conyers, North Carolina.

Austin has the perfect chance to follow his college crush to New York City, but a slumping economy causes him to hesitate, and he instead takes a job as town manager of Conyers -- where he discovers his master’s degree is no match for the well-oiled machinery of “good ol’ boy” Southern politics.

Austin visits the Comfort Café to sample its famous raspberry pie, but gets much more than a dose of dessert – he gets a helping of Blythe, who brings a splash of color to his gray-flannel world … and makes him determined to discover why she abandoned her Ivy League ambitions.

Austin, brilliantly imaginative Austin imagines away his thinning hair and envisions himself with muscles to rival a super hero. On the other hand, his desk job isn't really too awful, when he realizes his other choice irritates his hay-fever. Austin, transplanted into the southern state of North Carolina cannot quite pull off the drawl and quickly runs amok of the local Snake Lady.

Blythe, brilliantly set off by her tangerine tresses and serving up that yummy pie, (although likely not in the kind of pie Austin actually ordered,) is a bubbly fun heroine with something to say about everything. She isn't flip though, and very polite to her customers. ("Sorry - I didn't mean to say 'sex' before two o'clock.") Nothing much fazes her and a taste of her chatter is better than any attempt to convey it: "They were out of fresh blueberries for the pancakes, but we do have some canned stuff, though grandma over there won't tell you it's canned so I wanted to hold off because I know the canned stuff makes you irregular."

Austin is so much more than he appears on the surface - and it doesn't take him long to appreciate that there is, or there must be, a great deal more to Blythe than he can guess. She could be far more than a small town waitress threatening to charge fifty cents for her pretty smile, but like him, who she is and who she wants to be are not simple matters. The comic books may need grounding in reality, but Blythe sure doesn't!

Every line of "Comfort" is bursting with sparkling emotion. Yes, there is something citrus-ey or effervescent about this light delight of a romance. I especially enjoyed the amazing southern flair, from Good News and Good Works to the prevalence of tradition. Dialogue is often so funny you will treat yourself to a re-read and descriptions are kept to a minimum. From the detestable mayor to Queen - the center of town gossip - every thing and everyone fits in this story just right.

'Leaving the Comfort Cafe' has it all - deep, complex characters, an unpredictable storyline, that hint of mystery about the heroine, and the hero that won't quite admit to his own Norse god fantasy. This light-hearted tale is one of those guilt-free pleasures that leaves you warm and happy. A genuine pleasure.