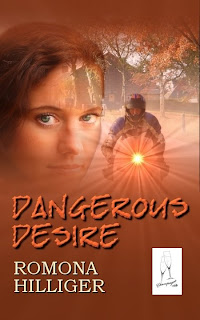 A twist of fate and an elegant, professional woman is in a steamy tryst with a stunning, leather-clad biker.

Dangerous Desire is about two hearts destined to be together, but they have to struggle through many trials and tribulations before they get there. Isn't that what love is all about?

The heroine, Amy, is presented as a confident, intelligent woman, and I really liked how she was with Jamie -- even her insecurities about their differences. She's drawn to him and tries to fight it, but she fails time and again because the attraction is so strong, and that made her seem real and human to me. But with her husband, Keith, she puts up with a lot and I don't understand why she stays with him, so I'm a little bit conflicted when I think of how I felt about Amy. I do have to say, as far as antagonists go, Keith is a good one, because he is perfect bad guy material!

I had a really good feeling about Jamie right away. His rugged good looks and the way he is described physically is appealing, but he also has this tough guy exterior coupled with a true good-guy persona that I find attractive in a hero. He teaches struggling writers and helps out at a half-way house, but wears leather and has tattoos. No wonder women are falling all over themselves to flirt with him, who can resist? But focused on his goals, he hardly notices, which made me like him even more. Some of his motivations are somewhat puzzling to me, but in view of the complexity of the issues between Jamie and Amy, his actions and reactions to situations may be construed as justified and I wanted to give him the benefit of the doubt because he is such a good and decent man.

For me, one small distraction is the story's inclusion of references and local idioms from the author's Australian background. Because I'm not Australian, many of them were unfamiliar to me, which caused me to pause my reading so I could try and figure it out. For the most part, though, I was eventually able to discern her meaning so it didn't detract from my overall enjoyment of the story.

The chemistry between Amy and Jamie is sizzling and the sexual tension is kept at peak from the moment they meet. I found their interactions emotive and their passion leapt off the pages, which is what kept me turning them. Not only quite enjoyable, Dangerous Desire is a rousing love story about forbidden desire and second chances.