Review: The Witch and The Wolf 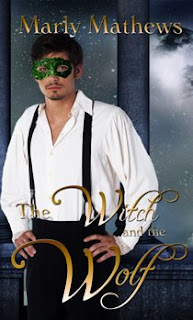 The Witch and the Wolf
by Marly Matthews

Arabella had inherited her mother's gift of witchery, but the one man that presented the greatest threat to her, the man who called himself the Wolf,
seemed immune to her powers.

Having fled the mobs of the revolution to England as a child, when Arabella returns to France she is enlisted to aid Napoleon's cause as a spy-until the man known
only to her as the Wolf abducts her and returns her to England once more.

I personally really enjoy historical fiction and this story pleased me. It takes place during the French Revolution and thereafter. The writing is such that I felt transported right into events and felt the fear and passion that was prevalent then. Transportation by horse and carriage, elegant clothes worn by elegant ladies, fawning gentlemen, the constant intrigues that were carried on behind the royal scene can all be enjoyed by the reader. The language and speech patterns here and there tends to resemble modern day language but on the whole language is authentic as well. I enjoyed the reminder of what had been taking place in the courts of England and France as they struggled with their hatred of each other.

The romance that Arabella De Maurier and Christopher Wyndham tried so hard to deny accelerates through the story building to a delicious crescendo at the end as true love prevails. Christopher refuses to give up on his love as Arabella twists and turns looking for a way to solve her problems. As hard as he tries Wyndham cannot stop loving her. It makes you wish for a man just like him for yourself.

I eagerly followed the ups and downs of the love the two main characters have for each other. Their relationship is stormy, but so touching in places it's sure to bring a smile to your face as it did mine. You'll want to pay close attention while you read so you don’t miss any of the juicy parts. It makes for a very fascinating time. There are many other threads of people’s lives and events woven throughout the main love story that also make it interesting to follow. All that passion and action and history woven together makes this a book you really should read!