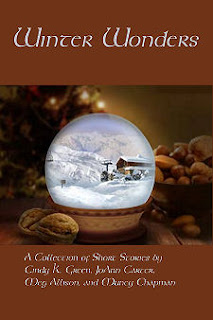 SNOW KISSED by Cindy K. Green
Today is one of those days Logan Reilly wished he'd stayed in bed. Not only does he have to deal with the annoying Winter Wonderland Carnival but his close friend, that whimsical lover of snow, Holly Armstrong, was leaving town forever. The question is why didn't she tell him and why today of all days does he realize he loves her? Can he change her mind and make her stay?

SMUGGLER OF THE HEART by JoAnn Carter
Disheartened and tired, Samantha Warren returns to Vermont during the winter break. Her passion for history rekindles after finding an old smuggler's chest hidden in her grandparents' attic. Will she be able to return to New Jersey without her heart being smuggled like the chest once was? Or is it already too late?

GWEN'S RESOLUTION by Meg Allison
For Gwen Josephs, the New Year held no more nights reading novel after novel. Even if she had to go it alone…or would she?
Enter Tad Smith, a man in the right place with the right plans. Just another coincidence in a string?
Maybe. Or maybe it's fate.

MAYBE FOREVER by Muncy G. Chapman
When Margy Mayfield gives shelter to a near-frozen man during the worst blizzard of the season, her tender heart rules over her sensible head. But what if this stranger turns out to be the escaped prisoner reported loose in her area?

This brief 79 page book is a compilation of four short, sweet, winter romances. All four tales were enjoyable, easy reads. It's definitely a curl-up-with-hot-chocolate-and-relax-by-the-fire sort of book that leaves one with a warm and agreeable aftertaste - you know, the type where you close the cover with a dreamy smile and a satisfied sigh.

#1 SNOW KISSED by Cindy K. Green
What will push a man to declare his love and fidelity better than the threat of losing the one he loves? In this short piece, Cindy Green plays on the long standing, but somewhat stagnant rela-tionship between Logan and Holly and brings their building emotions and uncertainties to the forefront. Holly is planning on leaving town for good. Will Logan let her go, or will he step out and tell her how he really feels? I especially liked the way the author makes the characters and small town situation seem real and down to earth, then smudges and softens the edges with a gentle snow and a gentle realization of love.

#2 SMUGGLER OF THE HEART by JoAnn Carter
Samantha has left her God and the man she loves to pursue her passion: teaching history. Pla-gued by emptiness and a growing lack of passion and ambition, Samantha returns to her small hometown in Vermont for a visit. She's been away 7 years, but Ms. Carter does a credible job of reconnecting the heroine to her roots via a historical old box that had been used for smuggling in the Vermont Mountains - a box with a very romantic story attached to it. The ending seemed like it was going to be predictable, but I was pleasantly surprised by the subtle - and definitely romantic - twist.

#3 GWEN'S RESOLUTION by Meg Allison
Folks, I am a consummate sceptic in the "love at first sight" arena, but Meg Allison's beautifully woven story has softened my stance. She paints a wonderfully believable portrait of being in the right place at the proverbial right time and falling in love. Gwen is determined to stop sitting home alone, feeling sorry for herself. She's going to be bold and brave by celebrating New Year's Eve on her own. Her plans are changed, however, once she meets Tad.

Gwen and Tad are both depicted with depth and gentleness. And Ms. Allison didn't overshoot the brevity of the story by trying to take them beyond the beginning of their relationship - a be-ginning that promises to bloom into "Happily Ever After".
I think this may have been my favorite of the four stories!

#4 MAYBE FOREVER by Muncy G. Chapman
Margy is alone in her farmhouse during a raging snowstorm. The radio news gives the warning that a dangerous inmate has escaped from the State prison and is on the loose. Later in the even-ing the inevitable happens and a strange man starts knocking on her door. Is it truly a motorist in need, stranded in the storm, or is it the criminal seeking refuge - or something more sinister?

This was an agreeable story, with a plot that had great potential for suspense. However, the author could have kept the reader guessing a little longer before revealing if the traveler was the hero or the villain! Margy was well protrayed as someone who had been burnt by love before and is now struggling to make ends meet - both financially and emotionally. The hero comes across convincingly and believably chivalrous. The villain was satisfyingly greedy and nasty. The ending was more or less realistic and left the reader with a sense that love was going to bloom, despite the snow.