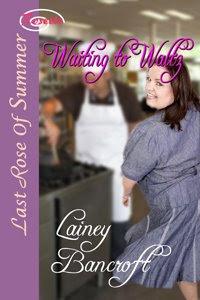 Waiting to Waltz
by Lainey Bancroft

A man who lives to cook and a woman who loves to eat should be a magical match. Except Riana Walker's French is even worse than Jacques Chevalier's English. Besides, with a husband who left her because he claimed her thighs were doughy enough to sustain a Wonder Bread factory, she's sworn off rich food. Can the enthusiastic French chef woo the diet-addicted divorcee into dancing to a different drummer? Or when summer ends will Jacques return to France and leave Riana waiting to waltz?

I didn’t realize it when I picked up this story, but it’s the sequel to “Ready to Reel” (or really, the third story featuring the same three divorcees: Alex, Suzette, and Riana). “Waiting to Waltz” is Riana’s story, and it’s just as enjoyable as “Ready to Reel.” Riana is a plus-sized single mom to Ethan, a typical, moody seventeen year old. But while this heroine longs for a man, especially since her two best friends have found their soulmates, she also knows her “fat ass” and her adolescent son keep her from finding a true love of her own.

When Suzette’s French cousin Jacques comes to town for her wedding and needs a place to stay for an eight-week vacation (he’s also the wedding chef), Riana steps up and offers her home and huge kitchen. She’s not thrilled with having to cover up her thighs for two months, but she adores Suzette. As soon as Jacques arrives from France, however, the two hit it off, and soon Riana is showing him the sights of Toronto, and he’s cooking delicious meals for her every day. It’s only a matter of time before this friendship turns to romance, and when they give in to passion, their lovemaking is just as satisfying as all those home-cooked meals.

Of course, Riana has to deal with three insecurities here: her self-consciousness about her weight; her disapproving son; and her own fear that Jacques will return to France after the wedding. I won’t spoil the ending; I’ll just say that it was nice to see Riana come to her senses and finally put her heart first in life. I wasn’t crazy about the story’s ending and thought it could have been a little more tightly wrapped up, but it’s still satisfying.

As she did in “Ready to Reel,” Ms. Bancroft develops her characters well. All three main female characters are realistic and feisty, the kind of middle-aged women we all know and like to spend time with. And Jacques, though not a typical romance hero in either appearance or action, is absolutely charming. The author captures his accent perfectly, and his earnest attraction for Riana (along with the way he stands up to her son), will win the hearts of readers.

I very much enjoyed this story of a plus-size woman finding love a second time around and recommend it highly!