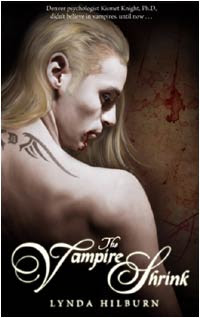 The Vampire Shrink
by Lynda Hilburn

Denver psychologist Kismet Knight, Ph.D., doesn't believe in the paranormal. She especially doesn't believe in vampires. That is, until a new client introduces Kismet to the vampire underworld and a drop dead gorgeous, 800-year-old vampire named Devereux. Kismet isn't buying the vampire story, but can't explain why she has such odd reactions and feelings whenever Devereux is near. Kismet is soon forced to open her mind to other possibilities, however, when she is visited by two angry bloodsuckers who would like nothing better than to challenge Devereux by hurting Kismet.

To make life just a bit more complicated, one of Kismet's clients shows up in her office almost completely drained of blood, and Kismet finds herself immersed in an ongoing murder investigation. Enter handsome FBI profiler Alan Stevens who warns her that vampires are very real. And one is a murderer. A murderer who is after her.

In the midst of it all, Kismet realizes she has feelings for both the vampire and the profiler. But though she cares for each of the men, facing the reality that vampires exist is enough of a challenge…for now.

Therapist protagonists aren't super new to the paranormal genre. Greg in A Quick Bite by Lynsay Sands, for example. But a protagonist as a therapist who specializes in treating paranormal beings is an interesting and refreshing twist in a genre that, for this reader, is going a bit stale.

Kismet's career didn't start out that way. The first part of the book deals with her exposure to the paranormal world and her decision to modify her target client base. As she works her way deeper into local vampire culture, she's forced to face the reality of the paranormal in the face of her scientific background. The second part focuses on the kick-butt paranormal stuff.

Vampire Shrink is a very character-centric book, focusing more on the heroine instead of the heroes. I liked that. Kismet is fascinating study in contradictions. She's an expert on human behavior, but she sometimes comes across as naive. She has some subtle psychic powers of her own, but yet she spends most of the book rationalizing all of the clues to the paranormal world due to her scientific background. It bothered me a bit that there wasn't more of a dramatic turn for Kismet in that regard. When she finally acknowledged the vampire world it came across as more of a shrug and an "Okay." With something as important as a person having to confront proof that's contrary to their personal beliefs, there should be at least a little angst. But this also says a lot about Kismet's personality. These contradictions kept me reading, because I wanted to see what she would do or say next.

I had some difficulty connecting to the heroes, though. Devereux is a sexy alpha vampire, Alan a sexy alpha FBI agent. I have to admit, I liked Alan better. He seems to have been better developed, and his back story and goals are a lot more interesting to me.

Kismet goes through two thirds of the book thinking both of them are crazy, yet she's attracted to both. The author has a real strength for writing love scenes, but by the end of the book I wasn't buying the strong emotional attachment that Kismet displayed. The depth of feeling was necessary for the conclusion, but I feel that the protagonist's switch from "I'm conflicted," to "I can't live without him," happened too fast and could have been set up better.

That said, Vampire Shrink is written with a strong voice and is well worth its entertainment dollar for Kismet alone. It should appeal to fans of Laurell K. Hamilton and general vampire fiction.