Review: Through A Glass Darkly 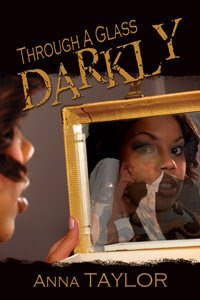 Through a Glass Darkly
by Anna Taylor

How do you prove the face in the mirror is you when everyone insists it’s someone else?

Roxanna’s only defense? God called her by name when she gave her life to Christ. That name was Roxanna. No matter what those photos show, she insists she’s not Claire. William remains unconvinced, and Roxanna almost gives up… until events force them into an alliance that will lead either to the truth or to their deaths.

Roxanna Mitchell wakes up to a strange bedroom, two men that she is barely acquainted with, and the foreign name of Claire Denby. She cannot remember how she got there and when. She cannot understand why the man who hired her to do the books at his business, Bradley Denby and his brother Henry insist that she is Claire, the wife of Henry. No matter how much she protests, nobody around her seems to care that she is not who they say she is. Being drugged and held a prisoner, she puts her trust in God and hopes for an escape.

Dr. William McCoy went to the huge Denby mansion when his mentor, Dr. Bennet, was out of town. Fearing an emergency, he goes in to see Claire Denby. She seems unstable -- claiming she is not Mrs. Denby. However William has been fooled by a pair of sad eyes and a sob story before and he almost lost the profession of his life. So, he is not going to fall for it again. But there is something wrong at the Denby place and he cannot seem to get Claire/Roxanna out of his mind. Is she really being held hostage?

Big plans and motives are at work that neither of them can identify. The ruthless and respected Denby family will not allow its good name to be defamed and it has got all its bases covered. Roxanna, having nowhere else to turn has decided to trust God. William having lost his faith, must decided if he should be drawn into this fray because of a pair of pain-filled eyes that beckon to him. Is he being fooled once again?

The twists and turns in this story definitely kept me on the edge of my seat as I went through it. In the beginning I was a bit confused as should be the case in a suspense/mystery story. If there is no confusion, then there is nothing to be solved and it will not be called a mystery. The suspense builds and grows as the main characters strive to understand the motives behind the Denby’s. The hopelessness that Roxanna feels is profoundly felt throughout the story making her triumph all the more sweet and poignant. William’s struggle to trust and have faith is so vivid. I found myself identifying with him on many levels as he wavered between believing Roxanna’s story and believing God. Through a Glass Darkly was a wonderful and exciting read sure to entertain and uplift.

Posted by The Long and the Short of It Reviews at 5:57 AM