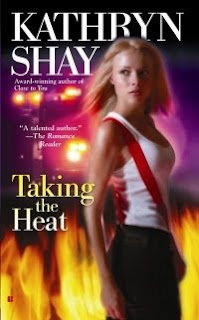 Taking the Heat
by Kathryn Shay

Liam O'Neil is trying to take care of his troubled seven-year-old son and cocky teenager, and work full time at the family-owned Bailey's Irish Pub. Widowed three years ago, he's ready to date again (at the insistence of his brothers). But his life is in flux, his future unclear, when he meets Sophie Taylor, a female in the Fire Department of New York.

A consummate firefighter who was rescued herself by the FDNY when she was ten, she loves her job and her "firefighter family." Liam's as attracted to her as she to him, which is fun and flirty, until they both start to care about each other. Yet she's the last person he can get involved with. His youngest is suffering from abandonment issues and depression, and needs stability. Even when they become involved, both Liam and Sophie know their relationship is doomed. Or is it?

When I discovered I would be reviewing this book, AND that it was part of a series, I ran out and grabbed the first two books and read them first (what a great choice on my part, as Ms. Shay is a superb author). “Taking the Heat” is the story of Liam, and can stand alone, but is far richer when read in conjunction with the first two books, “Someone To Believe In” and “Close To You”.

Of all the brothers, Liam was the one who intrigued me most from the beginning. Quiet, introspective, a good and devoted father...I wanted to know what made him tick. “Taking the Heat” did not disappoint. In fact, it only made me care about him more.

But, more than just a well-written, contemporary romance, this novel also addresses the issues facing a woman in what is typically a man’s job: a firefighter.

Liam is struggling to regain his footing after losing his much-loved wife, Kitty, to cancer three years before. He’s just feeling ready to enter the dating pool again, when he meets Sophie and is surprised by the depth of attraction he feels. Still, she’s entirely inappropriate for him, and for his family. He needs someone who’s going to be around, and Sophie throws herself in harms way on a daily basis. Still, there’s not denying their attraction, and they quickly become involved in an illicit affair.

As things progress beyond the physical, it becomes clear that there’s an arsonist on the loose, and he’s targeting Sophie and her co-workers. The danger, and what the fear of losing her does to Liam and his sons, is more than anyone wants to face. Will Sophie and Liam be able to work things out? Who, if anyone, will make the sacrifices necessary to build a strong and lasting relationship?

Sophie was such a fun character. Certainly, she was full of worry and angst, as any person is. But she was also funny and loving and kind. And sexy. Oh yeah, that little character trait was picked up on by Liam and his brothers right off the bat. I say, good for her for not trying to hide her femininity or sexuality in the name of fitting in to the boys club of the NYFD.

Liam was an amazing character, and I fell head over heels in love with him. Who wouldn’t? Irish temper aside, he was a thoughtful friend, a loving and adventurous boyfriend and a dad willing to sacrifice everything for his sons’ happiness.

I really loved this story! Ms. Shay has amazing talent and a way of telling a story that grabs you right from the start. Packed with emotion, it’s a sexy and exciting book that’s difficult to put down before finishing. The author also deals nicely with the aftermath of the great loss of those firefighters who died selflessly helping the city of New York during 9/11, and with the difficulty most firefighters face when trying to juggle a family life with the ever-present possibility of death.

Dylan’s story is next, right Ms. Shay? I for one can’t wait to grab it the moment it hits the shelves!

Posted by Long and Short Reviews at 5:02 AM