Review: Somewhere Between Love and Hate 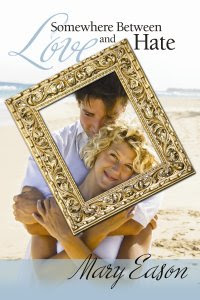 Somewhere between Love and Hate
by Mary Eason

When Lili Fraser first agreed to help her father sell his antiquities gallery, she had no idea she was walking into a carefully prepared trap. The plan for revenge, orchestrated by Damon Bortelli, had taken years to perfect but only one night in Lili's arms to destroy.

Somewhere between Love and Hate is seemingly about a high-stakes business deal and one man’s quest to avenge his father’s betrayal and death. But really it’s an in-depth character study of the hero and heroine and how their irresistible attraction to each other changes everything. The novel moves between the power corridors of Manhattan, a seaside Connecticut mansion, and the snow-covered mountains of Colorado (via private jet, of course!) and along the way, the reader is treated to a spicy, tension-filled romance that never drags or disappoints.

Lili Fraser, the heroine, has her world turned upside down early in the novel as she finds out that her family situation is not what she thought it was. I admired her grit and resiliency as well as her willingness to do everything she could to save her father from the hero’s revenge. Sometimes, toward the end of the novel especially, Lili struck me as a little passive and weepy--especially for a lawyer--but for the most part, she matched well with the hero, and her loyalty to her father made her a likeable character I easily sympathized with. And I certainly understood her powerful attraction to the hero and fell in lust and love with him right along with her.

The hero, Damon Bortelli, is the classic alpha male. Rich, powerful, and handsome and with just enough ruthless determination to make him formidable but not so much I ever felt the heroine wasn’t safe with him. At first, Damon seemed like one of those ‘tall, dark and dangerous’ heroes of old--almost one-dimensional in his controlled manliness--but as the author reveals his character, the reader sees his conflicting desires and understands there is much more to him than lust for revenge. I really enjoyed watching the progression of Damon’s character throughout the novel as he slowly comes to realize that Lili’s presence has changed everything, including his priorities.

One reason I’m not giving this story a higher rating is that the first two chapters are chock full of back story. It felt a little like the beginning of a TV show where they try to catch you up on what happened in previous episodes. I’m not sure why the author would open the story this way, but it was a little strange to spend ten pages reading the characters’ thoughts about what has just happened rather than reading the events in ‘real time.’ Other than that distraction, though, this is a well-written contemporary romance that delves deep into the characters’ lives and carries the reader along on their emotion-filled journey to love.