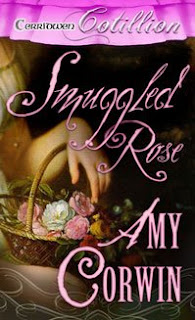 The Smuggled Rose
by Amy Corwin

A cynical earl and a rose smuggler are an unlikely pair, particularly when the smuggler is a supposedly fallen woman the earl owes for saving his feckless brother's life.

Nonetheless, Michael, the earl of Ramsgate, is determined to repay his family's debt by presenting Margaret at Court — an action calculated to repair even the worst reputation. But Margaret has been burned before and is suspicious that Michael's intentions aren't entirely honorable…despite the certainty in her heart that she can trust him.

As the tension between them flares and Michael's feelings for Margaret strain his self-control, an old enemy bent on revenge returns to challenge Michael's iron determination…and threatens to take Margaret away from him forever.

All of polite and non-polite society knows who Margaret Lane is. An unimaginable and false scandal purported by a spurned suitor, caused Margaret to flee the London ton and retire to the safe country home of her ancestors with her grandmother. Living in seclusion for a while, other than a pair of servants (who are more friends than employees), she manages to make an income by smuggling, with the help of a French man. One stormy night, when the French man arrives with the stolen goods, there also comes a wounded young man, barely coherent and losing lots of blood. Following close behind him is the police.

Lord Michael Ramsgate cannot understand his family’s penchant for foolhardiness and spontaneity. After all, he is the one who has to save them from their insensibilities. And his brother’s latest actions are nothing but irresponsible. But as his elder brother he has a duty towards his family to protect and care for them. His ideals lead him to the home of the famous Margaret Lane who was kind enough to hide his brother’s presence from the police.

The two strike up a friendship that forms over the care of Michael’s brother. Since the Ramsgate’s never leave their debt unpaid, Michael confers with his family and comes to the conclusions that Miss Lane will be rewarded by being presented to polite society and introduced in the courts. Margaret does not want any part of that, but she soon sees the need for such an action. However, in London her past rears its ugly head. Will Michael and Margaret realize their love before her past swallows her up?

I really enjoyed this novel. Margaret Lane is a woman who has suffered much heartache, including being abandoned by her family. However, she has not lost her simplicity and kindness even through her ordeal. She does not use her past to justify self-pity and hurting others. Lord Michael’s character is very presumptuous and is a carbon copy of the high and lofty Lord, initially. But throughout the story, I was able to seem him change his attitude, and ideas. The characters’ development and growth was portrayed throughout the story through their actions and emotions. The story moves fairly quickly with events happening in quick succession. I enjoyed that very much. Ms. Corwin is a great author and I am looking forward to more stories from her.

For Print Book
Posted by The Long and the Short of It Reviews at 5:01 AM