Review: A Sigh Of Love 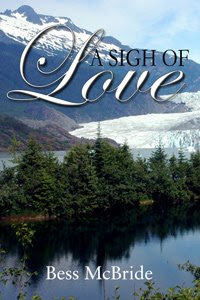 A Sigh of Love
by Bess McBride

Abbie is on her way to Anchorage, Alaska to meet George whom she has been corresponding by telephone for the past three months. George has repeatedly asked her to come up to Alaska for a visit so they can meet in person. Call her crazy, but Abbie makes airline reservations to fly from her home in Seattle up to Anchorage to meet George. She’s lonely. Why shouldn’t she make a mad romantic dash up to the last frontier to meet a man? She’ll just ignore the practicality and logistics of a long-distance relationship. When she calls George to let him know her arrival time, he chooses that awful moment to let Abbie know that he thinks they don’t have much in common after all and she should cancel her plane reservations. Abbie is stunned, humiliated and ashamed of the lonely desperation that drove her to make nonrefundable airline reservations to Alaska.

What to do? Abbie decides to go to Alaska anyway. A grouchy and depressed Abbie meets Tom on the plane, a tall, handsome anthropology professor who happens to be half Native Alaskan and half Caucasian. As the plane flies north, Tom and Abbie discover a mutual attraction. By flight’s end, Abbie is completely enamored of the stranger, and she doubts her judgment, perhaps even her sanity, as she finds herself falling again for yet another Alaskan male...until George shows up, that is.

A Sigh of Love is a story of confronting one's personal insecurities, something with which I can easily identify.

Abby's choice to take a trip to Alaska by herself showed me courage that I could tell she fought to achieve. She was extremely anxious about the trip but I have to give her credit for testing herself. She isn't someone I would be friends with, however, as I found her a bit draining. Her tendency toward self-doubt and her neediness for a man are not characteristics that I typically find interesting in a love story heroine.

Tom I liked a lot more. He's half Native Alaskan and I could visualize how his heritage reflects in his handsome features. He is both calm and passionate and his intensity shows in his instant attraction to Abby. I enjoyed his gentle yet persistent pursuit of her. He made sure that she knew that he was interested, but also took care not to make her uncomfortable. I found his considerate manner appealing.

The relationship between Abby and Tom is riddled with strife, but Tom's quiet determination keeps them on track, and the romance is tender and sweet. The imagery used in describing the beauty of various sites in Alaska made me want to hop on a plane and see it all myself. This would be a good book to curl up with when you need a vacation but don't have the time.