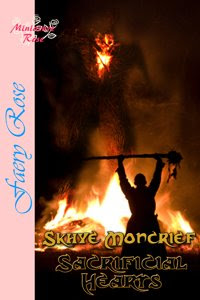 Alone, Twila Deeds tries to find her lost brother and stumbles upon a cult she believes is preparing to sacrifice her in a Valentines-Day sex ritual. She learns her brother has joined the cult and claims to be saving her by bringing her into the fold. She can't trust her brat brother, a selfish teen who never did anything for anyone. Nor dare she trust the cult's gorgeous member who arrives to escort her to the cult's Scottish castle on his motorcycle. She has no intention of falling victim to the sacrificial blade before her baby brother is served his just dessert.

But Illusion manifests as free will. (1st Point of Time Travel)

Gerard Abercrombie can't seem to convince Twila that his time-travel brotherhood has only her welfare in mind before his patience wears thin. Time-travel Code will save him because only the fairies know what the future holds as the Gods send two SACRIFICIAL HEARTS racing toward their destiny.

Intense, original, suspenseful, and dramatic: Moncrief's "Sacrificial Hearts" is an unpredictable, topsy-turvy romance caught in the vortex of what at first seems to be a criminal investigation. Confronted with a computer one step from an actual personality, Twila makes the unwise - but obvious- decision to turn it on. She's only a step from crossing a threshold. When one of the 'Feds' shows up, she thinks she can predict what is going on.

Even she cannot imagine the journey she is about to step into. Druid smart, druidess beautiful? A certain Fed's thoughts reveal more to the reader about intended journey than Twila understands: in a way, that occasional perspective is informative, but is also intrusive to the storyline.

The craziness of this seeming cult her younger brother is into frightens her... and Gerard, oh-so not a 'Fed' is incredibly attractive, distracting, but certainly not trustworthy. Or, is he? And, she is captive - or collaborator? Twila desperately tries to figure out what will happen to her-and the suspence builds with every page. In a world where symbols mean everything, magic is the way, how can you trust or believe?

"Sacrificial Hearts" dramatically offers a romance that is both in and out of time. Characters are well-developed and this is overall, a very fun read.