Review: The Rose of Shanhasson 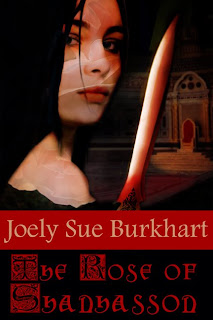 The Rose of Shanhasson
by Joely Sue Burkhart

To the east of the poisoned sands of Keldar lies a land so fertile and rich it is known as the Green Lands. Here, the people are not cursed by a terrible sin against the Trinity. No, they've done something worse.

As Our Blessed Lady's last Daughter, Shannari must rule as High Queen or the Green Lands will fall into eternal darkness. Her destiny is to shine against the Shadow, protect the land and people with her magic, and keep the Blackest Heart of Darkness imprisoned. Her blood is the key, powered by the love in her heart. However, Shannari's heart is broken, her magic is crippled, and the nobles must have forgotten the dire prophesies, because everyone wants her dead.

Only love can restore her magic, but her scars testify how love can be corrupted. So when a barbarian warlord conquers her army and professes a love like no other, Shannari's first instinct is to kill the mighty Khul. Even worse, one of the Khul's guards used to be an assassin--a very skilled assassin, if the darkness in the Blood's eyes is any indication. The same darkness festers deep in her heart and draws her to the wickedly dangerous man as inexorably as his Khul's unshakable honor. Her weakening heart is not only torn between love and duty, but also between two magnificent warriors.

Yet neither warrior will be able to help her when Shadow calls her name.

I had the opportunity to review Ms. Burkhart’s novella, Survive My Fire, last year, and was very impressed with its unflinching exploration of the gritty, real side of love. I enjoyed Rose of Shanhasson for the same reason. There is a rich, atmospheric quality to Ms. Burkhart’s prose that makes it easy to sink into her world and its well constructed cultures.

I was excited to discover that this novel is the first in a trilogy set in the same world as Survive My Fire. Ms. Burkhart does a great job of introducing the characters, the conflicts, and setting up the overall story arc without slowing the pace or boring the reader. There are a lot of love scenes, but, instead of being gratuitous filler, they forward plot, they tell us more about the characters and the world. The love scenes are not for the squeamish, however. They involve a little violence in the way of biting, and sharing blood. Standard for vampire romances, but unexpected at first between humans. Also, Shannari refers to Rathghar by his name as well as his title, Khul. I was a bit confused at first until I realized this, and it’s possible some readers might have the same experience.

Ms. Burkhart also gets bonus points for illustrating the best way to deal with tangled extra-long hair. Start at the bottom and work your way up. So many fantasy writers give their heroine butt-length hair and never mention the every day maintenance of it. One cannot get through a sword fight, or run for one’s life without having to deal with hair-related consequences later.

Rose of Shanhasson is a gritty, sweaty great start to what I believe will be a promising trilogy. I’m really looking forward to getting my hands on the next one! This one’s recommended for fantasy and romantic fantasy readers who like a little Conan in their heroes.