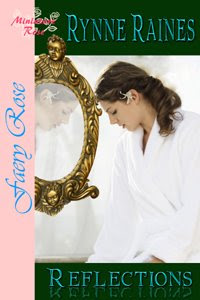 What is an untamable rake to do after being cursed to suffer a fate unknown to man; to experience solitude in the deepest sense of the word? Watch and wait.

As a silent observer in a world he is no longer part of, Rykel Deveau has entertained himself by becoming engrossed in the lives of the living. Society has changed in two hundred years—more importantly, women have changed.

Now, over two centuries later, Rykel finds himself forced to share his living quarters with the most unusual female he has ever come across, sensual artist, Danica Lovel. Between the woman's hideous tattered bathrobe and unsightly pink slippers, he should be appalled, yet bizarrely, he finds himself strongly drawn to her. He wants her. The problem is, she has no idea he exists

I think everyone’s got a little bit of the superstitious inside them. Black cats, Samhain, and of course, one of the most well known bits of superstition: breaking a mirror brings seven years bad luck. But in Rynne Raines’ Reflections, I discovered mirrors a-breaking might not be nearly as bad as one thinks (except of course for needing a brand new mirror…).

Danica Lovel is our lovely heroine, a pretty little sculptor who is also a little beat up emotionally thanks to her jerk of an ex, Marc Montgomery, the same man who unfortunately owns the galleries where her work is shown. And since that ex happens to have Jessica, his new busty fiancée, heartbroken Danica is…well heartbroken!

Enter Rykel Deveau, the very delicious English rogue who lives in Danica’s mirror and whose journal is the inspiration behind Danica’s sexy sculptures. Thanks to a handy little curse, he is trapped in the mirror, able to only leave it by dividing himself from his thoughts and floating around Danica’s house like a ghost. It doesn’t take long before Danica accidentally frees our handsome Rykel by…you guessed it, breaking his mirror, and the fun begins, including two very stubborn people falling in love (along with having some smokin’ sex, yowza!).

Ms. Raines creates a sweet love story that had me smiling from the start. Not only is Rykel a true example of a historical rogue, Danica is adorably vivacious. And Erica with her boa…oh, she just leaves you giggling. The story is short but I was still drawn in as Rykel helps Danica rediscover her femininity and totally burns Marc the cheater the way only a classy Englishman can. I can guarantee you’ll be grinning when the two of them realize how just strong their chemistry is and the way they finally come together…ah, a true romance. Ms. Raines did a beautiful job and one of the few stories I believe that truly understands the meaning of a HEA – Happily Ever After.