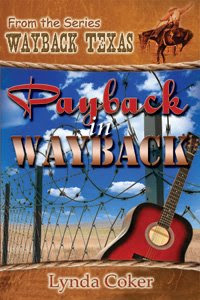 After spending twelve years in prison for a crime he didn’t commit, Corey Donovan is bent on getting a little payback. He’s headed for Wayback, Texas, the place where it all began. And who better to start with than the recently widowed Tiffany Covington.

Tiffany Covington is both thrilled and afraid when she learns Corey Donovan has returned to Wayback. She’s ready to repay old debts, the question is...will Corey accept her currency of exchange?

Lynda Coker puts the spurs to the romance in "Payback in Wayback," part of the 'Wayback Texas series.'

Thirty-one year old Corey has a past he can't forget, a torment of loneliness he lives with, and a perfectionist's attitude that keeps him on the job long after the rest of the guys are enjoying home cooked meals. He finds solace in his music - he's a guitar player and singer at the local night club, Telli's - until the night the devil's daughter shows up at the foot of his stage.

Tiffany is as he remembers, but perhaps, not as he expects. Emotions ricochet faster than bullets for both of them. They might have been reckless in the past, and neither will make that sort of mistake about another person again - or will they? And its not exactly about just the two of them anymore, either. One young bull-headed bull-rider proves just who's kid he is, (as if there were any doubt.)

Zippy dialogue and unexpected happenings make this a big story squeezed into some flashy tight jeans! Series follower's will enjoy a familiar stop at the Blue Bug Saloon, and the regular visit to the Saturday night rodeo.

This is a romance with the punch of 101 proof Wild Turkey. Have another round!