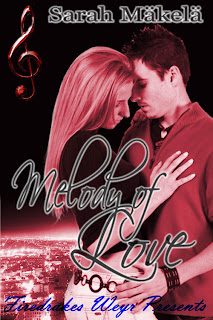 Melody of Love
by Sarah Makela

Kathryn Walker's life is great, except for one area. Love. Still reeling from the disappointment of past relationships, her world is sent spinning when danger encroaches on her simple life.

Alex Brown is a rock star dealing with betrayal, but once he meets Kathryn... his sights are set

Ms. Makela's "Melody of Love" is a dramatic contemporary romance.

Customer service representative Kathryn Walker let her fantasy about Dying Stone lead singer Alex Brown turn her into the occasional night club groupie. Although she dreamed of standing out, she found herself in the crush of humanity at the concerts. She couldn't help her annoyance one night, at ending up half way across the hall away from the stage, but she was almost as annoyed with herself for letting herself turn into the hopeless little fan-girl. That is, until she rushed the stage and The Alex Brown bent to touch her hand...

And set off events that Kathryn finds nothing short of unbelievable.

Alex, rock star that he is, definitely lives within a rock star morality. From Jack Daniels to hopping in the sack with the ex, he is nothing unexpected - although he does have that rather bad-boy attraction, guaranteed to turn large numbers of the opposite sex into weak kneed 'fan-girls.' Pragmatic Kathryn finds herself worrying about getting the dishes done and taking the trash out, in order to make a good impression - and her delightful naiveté is absolutely wonderful. She isn't childish or immature - but comes from such a hugely contrasting perspective, that the sharp differences between them, just as people, is apparent. Can "innocent sweetheart" change Alex into the man he thinks he might really be?

They each, at times, are frustrated with themselves. Their personal questioning is perhaps visited a few too many times; becoming a bit repetitive and slowing the story. The earnestness might suit these characters, but a little humor would have been a relief in this rather heavy story. Plausibility issues and a sliding point of view give the reader a little pause here and there, but didn't affect my enjoyment.

If you've ever dreamed that "little old you" could be a band groupie, or be the one girl that caught the cute lead-singer's eye, this story is for you. It has a fresh, brisk pace. It is like being caught inside a teenager's fantasy. This is, overall an interesting and very readable story.