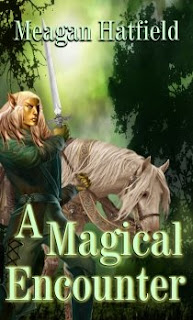 A Magical Encounter
by Meagan Hatfield

Kaiya Galbraith had always known her father, the duke, harbored no love for her. Still, until it happened, she would never have believed him capable of bartering her life away to a stranger in return for coin to pay off his debtors. All hope of finding love appeared lost to her forever...until she was rescued by a being she'd only ever seen in her dreams. When the Elfin warrior, Hanarom Avindaul, plucked her from imminent death into the safe shelter of his arms, though, she discovered she was all too eager to stay.

Fantasy fans will slip into "A Magical Encounter," as if they are stepping over the threshold to a strange fairyland themselves. For all it is a far far world, the main character, Hanoram, experiences the absolutely classic family pressure to marry. He may be both Elf Prince and warrior, but there's no ignoring one's mother. He'd prefer to spend time with his horse, Yano, or friend and second, Felanir.

Human woman Kaiya experiences greater - shall we say - negative pressure, and finds herself abruptly forced to make her way on her own. Her resourcefulness and courage make her the strong woman character we hope to find, and cannot help but admire. Their first meeting is everything that could be imagined - their eyes meet, he recognizes her terrible pain and fear. She sees before her one of the elves she's heard stories about. Yet, there it is, she is one race, and he another. What happens in the next moments will not only effect the two of them... but the whole of Duchy of Seriador.

Dialogue in "A Magical Encounter," is strong and heartfelt. More impressive is the world Hatfield creates. It is easy to imagine young Kaiya's room high in the keep, the drapes fluttering in the gentle breezes caught by the castle's high windows. You can imagine the place as surely as you can imagine the soft fabrics between your fingers. Small details recieve close attention as well; like the flask decorated with wrought vines and berries, or the taste of honey-ed wine. "A Magical Encounter," is full of powerful emotion and evocative moments in the heart of the dark forest.

I was left hoping Hatfield produces another work of elfin magic. Soon.