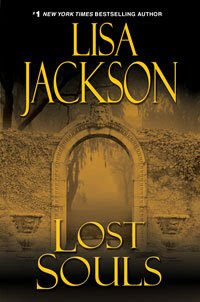 Twenty-seven-year-old Kristi Bentz is lucky to be alive. Not many people her age have nearly died twice at the hands of a serial killer, and lived to tell about it.

Her dad, New Orleans detective, Rick Bentz, wants Kristi to stay in New Orleans and out of danger. But if anything, Kristi’s experiences have made her even more fascinated by the mind of the serial killer. She hasn’t given up her dream of being a true-crime writer–of exploring the darkest recesses of evil–and now she just may bet her chance.

Three girls have disappeared at All Saints College in less than two years. All three were “lost souls”–troubled, vulnerable girls with no one to care about them, no one to come looking if they disappeared. The police think they’re runaways, but Kristi senses there’s something that links them, something terrifying.

She decides to enroll, following their same steps. All Saints has changed a lot since Kristi was an undergraduate. The stodgy Catholic university has lured an edgy new professor to its campus and gained a reputation for envelope-pushing, with classes like the very popular “The Influence of Vampirism in English Literature” and elaborately staged morality plays that feel more like the titillating entertainment of some underground club than religious spectacles. And there are whispers of a dark cult on campus whose members wear vials of blood around their necks and meet in secret chambers–rituals to which only the elite have access.

To find the truth, Kristi will need to become part of the cult’s inner circle, to learn their secrets, and play the part of the lost soul without losing herself in the process. It’s a dangerous path, and Kristi is skating on its knife-thin edge. The deeper she goes, the more Kristi begins to wonder if she is the hunter or the prey. She’s certain she’s being watched and followed–studied, even–as yet another girl disappears, and another. And when the bodies finally begin to surface–in ways that bring fear to the campus and terror to the hearts of even hardened cops like Detective Bentz and his partner Reuben Montoya–Kristi realizes with chilling clarity that she has underestimated her foe. She is playing a game with a killer more cunning and blood-thirsty than anyone can imagine, one who has personally selected her for membership in a cult of death from which there will be no escape.

Lost Souls is one of Ms. Jackson’s most riveting works to date. Though part of the New Orleans series, it only briefly touches upon Detectives Bentz and Montoya. This is very much Kristi’s story and those of us who follow the series and like the characters get to see her in a deeper way.

Kristi (and her shrink) think it’s time she moved out on her own and moved on with life after the harrowing experiences eighteen months before. So, she takes a baby step and goes back to college to finish her degree. The fact there have been disappearances that may or may not be runaways only adds interest to her decision.

Add to the mix the fact that her old boyfriend, Jay, from ten years earlier is now, in addition to his work at the police lab in New Orleans, teaching a night class at the college—a class Kristi is taking—ups the ante, because it’s obvious that even though they broke up, the chemistry is still there.

Kristi becomes more and more convinced something is wrong, something the police cannot—or will not—see. With Jay’s ties to the police department, he’s the obvious choice to ask for help.

The action, once you get into the book, was fast paced. The beginning was a little slow, dealing with Kristi leaving, getting set up in her apartment—but once she started classes and investigating, things picked up. Ms. Jackson gives you many suspects to choose from and, I have to admit, I didn’t know the guilty party until the end.

I enjoyed getting this look at Kristi and being able to see things more from her point of view. I REALLY liked Jay—now he’s the kind of professor I wished I’d had while I was in college!

Once again, Ms. Jackson has shown us the evil that lurks in the heart of man. I’m already looking forward to her next outing. She is definitely an auto-buy for this reader.

NOTE: If you have a private Blogger profile or a profile with no email address available, you must include an email in your entry -- this is how we inform the winner. If we are unable to locate an email for you, you're ineligible to win this prize. Thanks!
Posted by Long and Short Reviews at 5:02 AM