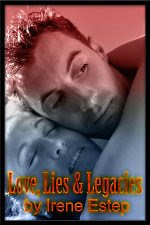 Placed on permanent disability by the department of Alcohol, Tobacco, and Firearms (ATF), Parker Wilson applies for a PI license. However, he doesn't plan on tracking down cheating spouses for a living, in spite of his feelings for the woman who tries to hire him to look into the seamy side of her late husband's life. But when Maggie Youngson becomes a suspect in the murder of this purported ex-lover, Parker changes his mind, believing the things she wants to know about the love affair could lead him to the real killer.

Having personal experience with the trauma of growing up amid nasty gossip about one's parent, Maggie Youngon doesn't want her 5 year old daughter to hear such nasty rumors about her own father. She's relieved when PI, Parker Wilson is willing to help prove her innocent of murder, but she isn't giving up on her original quest: to learn the truth about her late husband's past.

"Lies, Love & Legacies" has to be one of the most captivating books this reader has read in quite a while. The author's ability to described the characters in detail made me feel like I had known them all my life. The twists, plots and drama add very enticing action to the story.

Maggie lost her husband three years ago, and is still riddled with doubts about his fidelity. I connected with Maggie as a tortured heroine. Rumors abound and she not only has to protect her daughter from them but she's in financial straits too because of the way her husband died. It's tough being a single mom these days, but to have to deal with all this extra baggage on top of it has me rooting for Maggie and impressed with her strength of character.

Parker, a former agent injured in an investigation-gone bad is suffering a different type of torture. His internal struggles after surviving something he almost didn't has left him in a fog of depresson. I can empathize with Parker's inability to focus on the choices he has to make about what he should be doing for a living. It can't be easy having to rethink your life. When a former co-worker sends him a case that puts him back in touch with Maggie whom he'd had a short encounter with two years before, it sparked my interest. How would it go this time?

Maggie's strength was her determination and drive to pursue the truth, even to the point of looking into her husband's past. Sometimes you find out things that you'd wished you hadn't. Asking Parker to take her case turned out to be the best decision because well-written danger and drama surrounded her. Maggie is not the only one affected - many people innocent or not were touched by the danger and I was kept on the edge of my seat wondering who would be next and how.

Like all great mysteries, the secondary characters kept me guessing; why was the Star Restaurant owner killed? What was so important about the antique car? And I was really wondering how the missing chef fit in. As for the main characters, there were questions about Parker's father and his feelings for Maggie. How did it, if it did at all, tie in with her disappearance when his son was near death's door? So many questions kept me reading and wondering.

The author's ability to weave this mysterious murder-plot draws the readers in-rooting for Parker and Maggie to make their relationship work as well as pointing fingers at who they think might be the killer.

Readers would be remiss if they didn't get a copy of this book to read.

NOTE: If you have a private Blogger profile or a profile with no email address available, you must include an email in your entry -- this is how we inform the winner. If we are unable to locate an email for you, you're ineligible to win this prize. Thanks!
Posted by Long and Short Reviews at 5:00 AM