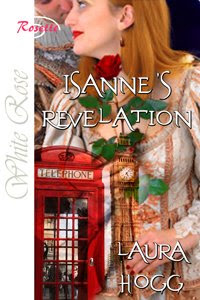 Symon de Burgh is a knight in the fourteenth century. His family has taken ill with the Plague, and he is desperate to save them. His faith has been tested, and he carries serious doubts. But God sometimes answers prayers in highly unusual ways. An adventure to the future will lead Symon to a place where his faith or lack of it will make all the difference.

This sweet inspirational romance, with a bit of time travel thrown in, is a quick, pleasant read. Though at times it’s a little confusing, especially the time travel element, if you pay close attention in the early pages you’ll figure out what’s happening.

The story jumps from fourteenth century England, where Isanne and her husband Symon are caught in the agonies of the Black Death plague, and present-day London, where they reunite only to find a chance to return to the past and try to right their wrongs. While Isanne has adjusted to her life as a soldier in the twenty-first century, however, Symon is the one who needs to be saved, for only accepting Christianity and the power of God will help him change his past actions.

The theme of salvation and trusting in God is nicely woven through this story, without being too preachy or heavy-handed. Isanne’s calm belief in herself and in God is admirable, although it is Symon’s steadfast love and faith that ends up saving them both. I always enjoy a story where the romantic couple are husband and wife, and “Isanne’s Revelation” doesn’t disappoint. Other than the sometimes abrupt jumps between time periods, I enjoyed it very much.