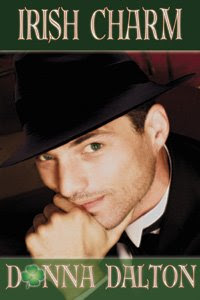 Pinkerton Agent Jamie Donovan is packed with Irish Charm, from his disarming lilt to his devastating smile, and he knows it. He uses his gifts to bring evil to justice and women to his bed. Most women that is, except icy Kathryn Mitchell, Katie as he prefers to call her, much to her dislike. She seems immune to his charms, yet he finds himself drawn to her, feeling the need to protect the head-strong agent from herself.

Kathryn Mitchell is determined to prove herself a capable investigator. With her three month trial employment nearly over, all seems to be going well, until rival agent Jamie Donovan shows up trailing the same thief she’s been assigned to capture. When the thief they are pursuing turns up dead, Kathryn and Jamie travel from New York City to Boston, battling turf, armed felons, and their feelings for each other as they attempt to track down a murderer.

Donna Dalton offers up another delightful new chapter in her popular series in the newest, "Irish Charm." The principle setting is New York City, 1886.

Self-possessed Kathryn Mitchell supports herself as an intense, driven private agency inspector, although her position is tenuous. She manages to blend in the poverty-ridden side of the nineteenth century city. She's capable, and determined to prove it. She works in a man's world, and resents the slightest doubt of her abilities - even resenting waiting for back-up, when necessary.

When flashy Jamie Donovan, the archetype of the bad-boy hero, enters her world, it is as a competitor for a rival agency. Impish character notwithstanding, his investigations produce results. (Even if his results are sometimes bought with less-than-desirable means.) He is charming, good looking, and far, far too attractive. "Katie" needs no 'white knight' however, and she flat out tells him so! Action is the name of the game in this fast paced tale.

Whether they will or no, Jamie and Kathryn do end up working together at times, although 'cooperating' would be overstating it. Donovan is far too clever, in addition to being easy on the eyes. It isn't until she finds a measure of compassion, that Kathryn softens toward the Irish devil.

Dialogue is fast paced - and somehow, Dalton manages to convey that hint of an Irish lilt, without letting it intrude into the story. Every one of their clashes is a delight to read. The backdrop of NYC of yesteryear is perfect and well imagined. Secondary characters too have 'character' and add a level of interest.

With all the emotion of the best romance blended with the intrigue of a murder-mystery, "Irish Charm" is a must read!