Review: I Bid One American 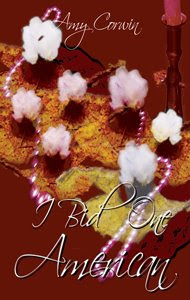 I Bid One American
by Amy Corwin

She's an American heiress nobody wants; he's a Duke every woman is after. When Nathaniel, Duke of Peckham, meets Charlotte, he's suspicious of her indifference. Too many women have sought—and failed—to catch him. However, Charlotte is more interested in dead pharaohs than English dukes. Her pretended immunity vanishes, however, when a debutante seeking to entrap Nathaniel gets murdered.

All too soon, his reputation as a misogynist makes him a suspect, and Charlotte impulsively comes to his aide. Unfortunately, both are unaware that a highwayman interested in rich heiresses is following Charlotte. And that another debutante lies dead in Nathaniel's carriage. Some nights just don't go as planned.

Nathaniel Archer, Duke of Peckham seems to live the life everybody envies. He has got the inherited title, money and women running after him. However, Nathaniel does not seem to think his life is all that exciting. He is not looking to fall into the trap of marriage anytime soon, making the women a nuisance. With the women running after him he has no time to enjoy his wealth like he wants to do. So what is so enviable about his life? When he meets his uncle’s ward, American heiress, Charlotte Haywood he is hesitant to befriend her since he is vary of women and their manipulations. However he is very surprised to find that she has no interest in the Duke of Peckham and her heart lies in Egypt with dead pharaohs and excavations.

Charlotte Haywood cannot wait to turn 24. Once she reaches this magic age she can leave all her reluctant guardians and journey to Egypt to start her dream of being an archaeologist. With her wealth, she wants to do something worthwhile. But before she can live the dismal city of London behind, she decides to help the Duke solve a case since the Archer family was so kind to her. Two debutantes were found murdered and the evidence all points to Nathanial. Can Nathanial and Charlotte figure out who the real killer is before it becomes Charlotte's turn to die? Can they learn to trust and love each other?

I must say that the only reason I requested this novel to review is because of the title. I am not going to give away the meaning behind the title since reading and finding it out is much more exciting! The title does not disappoint. The ingenuity behind the title is also portrayed throughout the story.

Filled with colorful characters with peculiar traits, this novel held me spellbound as I raced through its pages. The author does a wonderful job of portraying Charlotte with her strong American beliefs of equality but also a respect for the authority that she is under. Even though she does not like going to the balls, she accompanies the Archers since they are her guardians. I was also able to identify with her, especially regarding the fact that she spoke before she thought. That is a fault many people can own up to. The mystery is also very well developed and solved in a timely manner with a surprise ending that I was unable to guess.

This was a great read and Ms. Corwin has written an outstanding novel.