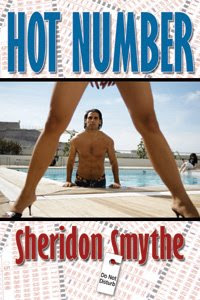 Jackpot! No one had needed to win the lottery more than Ashley Kavanagh, and she planned to enjoy every penny of her unexpected windfall – starting with a seven-day cruise to the Caribbean. But it wasn’t until a ship mix-up paired her with her ex-husband that things really started to heat up. She knew she was better off without Michael’s womanizing ways, but constant exposure to his well-muscled chest and to-die for lips left her feeling the burn.

Michael Kavanagh had hoped this cruise would help him relax, but when he walked in on his nearly naked ex-wife, everything suddenly became uncomfortably tight. Sharing a cabin with Ashley certainly wouldn’t be smooth sailing – she acted as if she’d much rather throw him overboard than listen to the truth about what happened two years ago – but deep in his heart Michael knew love would be their lifesaver.

Hot Number is such a fun and perfect title for this book! I think it's ideal because it applies to different things within the book. The all-consuming heat that burns between Michael and Ashley is breathtaking in its pulsing energy and I was fanning myself from page twenty-one until the end.

Ashley's wardrobe was almost a character in itself. Having packed for the cruise with seduction in mind — of her mediocre fiancé who declines the invitation — Michael's groaning reactions to her skimpy attire are priceless! Ashley is honest with herself about the attraction she feels for Michael — I thought her reference to him as an 'addiction' was perfect — but she's not willing to admit that her heart is involved. She is still harboring pain from his supposed betrayal, which I can understand, but I think her rigid refusal to open her mind and listen to his side of it made me think less of her. But her lack of self control around Michael is scorching and I was amazed at how he could so easily tear down her defenses.

Michael is incredibly hot and I thought him to be charismatic in so many ways. He is sensitive, buff, and has strength that others recognize, but I was drawn in by his vulnerability to Ashley combined with his intense longing for her. I found it both amusing and tantalizing that whenever he is in her presence, he is visibly aroused, and carries a jacket around to conceal it. His seductions are sensual and filled with raw passion and to my delight Ashley can't help but respond to quench her own need for him. I was more sympathetic to Michael's emotional wounds because Ashley didn't trust him when she should have.

The sexual tension is well written and I was always aware of how these two are helpless to contain the fire they feel for one another. It does have a happy ending that is satisfying; however, there is an element of the ending that left me frowning, because it seems sad and almost wasteful. There is a misunderstanding that is far-fetched, in my opinion. To clear it up, Michael recalls an inconsequential piece of information from two years prior, but he didn't think about the significance of that information at the time? In my opinion, it's not logical that he wouldn't, so the reveal of the misunderstanding was a bit of a let down for me, rather than uplifting.

Even with this minor issue, the relationship between Michael and Ashley is exciting to watch and I loved the supporting characters. Spicy and humorously entertaining, Hot Number is easy to recommend.