Review: His and Her Dalmations 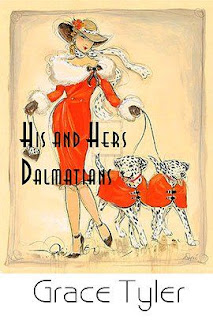 His and Her Dalmatians
by Grace Tyler

Callie and Hayden James have nothing in common, other than their last names and a pair of Dalmatians. Their relationship was just as volatile after their divorce, so they split up the dogs to maintain the peace. After two years apart, attending the wedding of mutual friends forces Callie and Hayden to see each other again. Can this event lead to a truce and sharing custody of the dogs?

His and Hers Dalmatians made me believe in new beginnings all over again. Callie is still recovering from the divorce from her delicious, wealthy ex, Hayden. Like in all romances, Callie and Hayden are both still strongly attracted to one another but their differences as people (Callie’s artistic temperament, Hayden’s logical calmness) keep them not only separated but permanently arguing it seems. Ms. Tyler managed to tug on my heart strings for the both of them, even in the beginning when Callie is all righteous indignation as she believes Hayden is a womanizer and Hayden, poor Hayden is mentally ogling his ex-wife and still knocked for a loop by the ending of their marriage. Yet the only things the couple seem to have in common are their babies, Ricky and Lucy, a pair of the most adorable Dalmatians I’ve ever read!

There were a few stumbling blocks for me though. I wholeheartedly approved of Callie, whose spunky nature is entertaining and empowering. And I thoroughly enjoyed Hayden as the ex-husband who slowly but surely realizes he wants his ex back. I fully expected Callie to give as good as she got and for a while, their verbal sparring is spicy and emotional, exciting to read. But once Callie realizes that Hayden is not as evil as she has painted him, she seems to lose all her spunkiness and turns instead into a worrying bundle of nerves. I felt for her yet I wanted her to not so easily fall apart especially after such a strong start.

Yet as Hayden continues to woo her, Callie rallies back and watching them fall in love all over again is one of the moments where I truly believed in happily ever after not just happily for now. The dogs play a huge part, bringing the couple together and at the end, doing their best to seal the deal permanently. Ms. Tyler pens a beautiful, modern love story in which I fell in love with all the characters and even made me want a pair of Dalmatians! Strongly recommended for those who believe in the beauty of second chances.