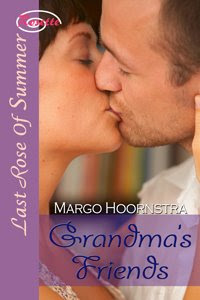 Laura Marshall's grandmother loves to arrange blind dates for her. Most are abysmal failures, until Grandma sets her up with devastatingly handsome and equally charming Ted Carlton. They hit it off so perfectly, Laura begins to imagine they may have a future together. Then she sees him in a passionate lip lock with some other woman. Now she wants only to forget all about him. Except she can't. Everywhere she goes, there he is, courting her. Doesn't he know they're totally wrong for each other?

Anyone who’s ever been set up on a blind date will take pity on poor Laura who, at thirty-five, has resorted to letting her grandmother do just that. But just when she agrees to another date, she meets Ted, who seems too good to be true. While I enjoyed this sweet story, I did feel that some of the details weren’t filled in, and some plot problems were conveniently skipped over, so that the end result is a somewhat uneven romantic tale.

There is a bit of a secret/mistaken identity in the first half of the story, which is pretty predictable. Still, it doesn’t really take away from the progression of Laura and Ted’s romance. But when Laura sees Ted kissing another woman in the restaurant after their first date, rather than just ask him “What the heck was that?” she mopes around and ignores his phone calls and his advances for another ten days.

Both Ted and Laura are likable characters, though I wish the author had been a little more descriptive about what Laura does for a living. Ted installs computer systems, but all I know about Laura is that she works in an office that needs them. I liked her grandmother, though, a relative who meddles in affairs of the heart but in a good way. We can tell she wants the best for her granddaughter.

Because of the obvious way in which Laura could have resolved her issue with Ted, the plot of this story lacks real tension, but in the end, these two find happiness together, which is all that really matters, right? “Grandma’s Friends” is a nice reminder that love, for anyone at any age, can wait right around the corner…so don’t give up on those blind dates just yet!