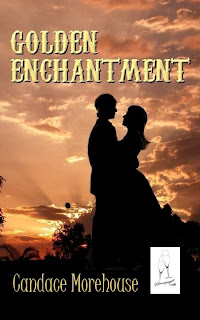 Sometimes the most coveted treasure of all can be found right beneath your nose.

When her father dies, Andrea Alexander decides to return home to New Mexico and continue his search for buried treasure dating back to the days of conquistadores. However, she didn't count on a mysterious figure shooting at her, a puzzle of clues and the involvement of her very masculine and handsome neighbour, Jake Houston.

Jake Houston remembers Andrea as the scrawny little tomboy next door who followed his every move. When they meet again years later, Jake is surprised to find Andrea has filled out in all the right places. Tempting as she may be, he is betrothed to another with no way out. Fighting his attraction to Andrea as he helps her solve the puzzle of the buried treasure will test his strength in more ways than one.

Destined to be together, will Andy and Jake find a way out of danger and around their problems to realize true love?

Candace Morehouse delivers a sensory delight in her debut novel, Golden Enchantment. Whether describing the electrical attraction between the hero and heroine, the gorgeous New Mexican terrain or the vividly drawn characters, this book is an enjoyable treat.

With the story beginning in 1880’s New York, Ms. Morehouse seamlessly shifted from the language and tone of a typical western to the more dignified tone of an American Victorian depending on whether the scene took place in New Mexico or New York—or from character to character, depending on their background. The character depictions and descriptions were superbly done—a fiesta of well-drawn characters from our spirited young heroine Andy, her greenhorn city-boy cousin Clarence, to the sexy and intrepid hero Jake and his Black widow fiancée Lupita.

My one qualm with the story would be the sudden and frequent point of view changes. I am a stickler for POV and the author had us in the heads of several characters within single scenes. It was quite bothersome and took my attention away from the story and the writing. With that in mind, I was still very much drawn into this story and immensely enjoyed the setting descriptions. They were so vivid; it was like I had really taken a visit to the New Mexican Territories in the 1880’s—a word picture to say the least. It was quite obvious the author knew and understood this setting and time period on a personal level.

It’s a great western story with a delicious cowboy hero which I would recommend to all readers.