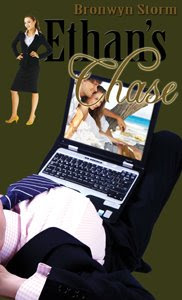 Still wounded from a disastrous love affair, advertising executive Ethan Phillips has spent the past five years outwitting Cupid with a series of dekes and fakes. Who knew the tricky cherub would get wise? Rather than piercing Ethan’s heart with an arrow, he douses it with amaretto-flavored milk. A quick visit to the drycleaner and a stern lecture on the dangers of gorgeous, charming women, and he figures he’s made another clean getaway.

But when the sexy woman turns out to be Chase Logan, his new systems programmer, Ethan’s got no where to run. Her charm, humor and intelligence soon have his heart racing and his libido revving. Suddenly, the man who spent his time running from Cupid, is now looking to borrow a few arrows. Ethan’s ready to give chase and pursue love. Will he catch the heart of his programmer or just be left catching his breath?

Millionaire Ethan Philips has sworn off women. After a disastrous relationship that leaves him wounded, he has refused to get into any relationship. However, his interest is piqued when he has a run in with a woman and her coffee. But that is not enough to push him into the dating game again. After all, look where his interest had landed him last time. This time he is going to make sure that his heart remains locked tight. But his two friends working with destiny has different plans. When the woman with the coffee lands in his office, what will he do? When clues show that she is directly responsible for an information leakage, will Ethan trust her?

Chase Logan cannot believe that she spilled coffee on a man on the streets. And she is even more shocked and embarrassed when she realizes that he is the owner of the company she is planning to place a bid for a consultant job. She wins the job because of Ethan’s friends and reluctantly agrees to it. Added to the job stress, her personal life is a nightmare, as a competitor tries to defame her and her business. Can she lean on Ethan during this time?

Ms. Storm creates a plethora of colorful characters in this novel. Even though her characters follow the usual roles that are in stories, she adds her own twist and a fresh outlook to them. For instance, one of Ethan’s friends is a computer geek and is personified as absent minded and geeky. However, she adds a sparkle to his character by pairing him with a woman who is beautiful and not at all geeky. The story moves quickly, however, it is an emotional roller coaster. One minute things are looking up, the next both the main characters are unsure about the other. But I believe that this roller-coaster created a very good story. The author also added an element of suspense to this story by introducing a stalker that does not seem to do anything wrong and hence cannot be caught. This made the pages turn even faster! I would definitely recommend this book to anyone and am looking forward to more books by this author.