Review: The Cop And The Mermaid 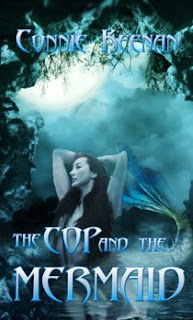 The Cop and the Mermaid
by Connie Keenan

Tommy's trouble was that he'd never been very good with women, and with Jenny, the woman he loved desperately-he was worse. He'd always thought she was special. He just had no idea how special she really was.

Jenny had adored Tommy a lifetime ago, but he'd never seemed interested in more than the platonic friendship they'd had. She hadn't expected her return to Windy Harbor to reawaken long unfulfilled desires.

The Cop and the Mermaid is an absolute delight! I marveled at the inventive rendering of how merfolk can be created and their playful, almost childlike behavior is positively enchanting.

Jenny has some baggage--don't we all?--but hers is rather unique. Divorced because her husband, Keith, thought her a freak when he found out about her, uh, fins, I could understand her mistrust of human men. Should she have told him before they were married? Sure, but I think I would have found it difficult as well having to tell someone that I had a tail, so I didn't hold that against her. Her teenage crush on Tommy, which was never acted on, was kind of heartbreaking. It made me cheer as she becomes assertive with Tommy when they meet again twenty-plus years later.

Tommy I absolutely adored. Gorgeous, tall and a cop, he loved Jenny as a kid and he realizes that he still does. His almost debilitating shyness with her almost gets in the way, and I was charmed by the depth of feelings for Jenny he masks as he tries to fight his fear of rejection. Once Jenny breaks through and lets him know his attention is welcome, the man is off to the races, and the once-shy boy is gone for good! I was thrilled by the way his pent-up emotions from years ago come bubbling out of him, and he becomes this big, sweet, vulnerable guy and he captured my heart as well as Jenny's.

There are several supporting characters and each play an important role in moving events along and I cared about each one of them. Okay, there is one that I didn't like so much, but being a not-so-nice guy, I wasn't supposed to! The relationships between the families — both natural and blended — are loving and poignant and it was a joy for me to watch as new beginnings develop and grow.

The Cop and the Mermaid is a wonderful, emotionally fulfilling story that entranced me from the first page to the last and is definitely worth a five book rating.