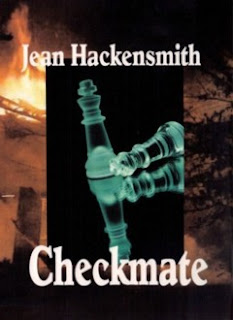 Caryn Deaver survived a nightmare... and now he's back.

Caryn's ex-husband bound her and their children hand and foot, locked them in the
bathroom, and set the house on fire. They managed to escape with their lives, and
Dan Hamilton was sentenced to eighteen years in prison for the crime. He's out now,
though, and the rules in his sadistic game allow Caryn only eleven moves before she dies.

Zach Riker, Cheyenne's Fire Chief, was the first paramedic on the scene eighteen years ago. He saved Caryn's life. Now she is his life, and he'll stop at nothing to protect the woman he loves.

This was one of the BEST suspense novels I’ve read in I don’t know how long. I’ll state right off that this is not so much a romance as a suspense. There are a H/H, but the romance is fairly fully developed. At the beginning of the story Caryn and Zach are living together and are very much in love. It seems everything is rosy, right up until Caryn gets a threatening note from her ex-husband, Dan, newly released from prison for almost killing Caryn and their two children eighteen years before.

I was nearly as nervous as Caryn! The reason behind the notes from Dan is simply to terrorize Caryn, Zach and the two (now-grown) children. Each note is accompanied by increasingly escalating and threatening activities leading to the inevitable murder of Caryn and everyone she loves.

Zach does everything he can to protect the woman he loves. His best friend, Brian (who is also the police chief) helps as well. But Caryn’s ex-husband is also an ex-cop, and he knows how things work. Despite all the various protections, Dan still manages to get through, still manages to frighten them, still manages to get close enough they believe they are in danger of being murdered.

Caryn’s children move. Phone numbers are changed. Guards are placed at her work. And, yet, Dan still gets to her, time and again.

Do NOT pick up this book unless you want to finish it in one sitting. This book is non-stop excitement. Even when things aren’t happening, you expect them to be, and it’s frightening to think of what these people are going through.

Is it a perfect book? Of course not, and that's why it's not a "Best Book", but it's darn close. The author head hops (though, it’s fairly seamless, to the point where even I – a POV purist – wasn’t thrown from the story), there are some bits of dialogue that sounded a little “off”. Sometimes I think character motivation didn’t ring entirely true. But despite these small glitches (and they ARE small), this was absolutely the most enthralling book I’ve read in months. If I were a Hollywood executive, I’d option this book for a movie immediately. It’s really that good.

If you’re a fan of non-stop action with enough romance to satisfy your heart, I highly recommend you give this book a chance.

NOTE: If you have a private Blogger profile or a profile with no email address available, you must include an email in your entry -- this is how we inform the winner. If we are unable to locate an email for you, you're ineligible to win this prize. Thanks!
Posted by Long and Short Reviews at 5:03 AM