Review: Brides of the West 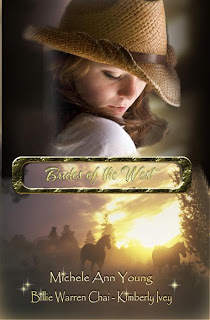 With hope in their hearts, three women looking for a new life take fate in their own hands and head West to become the brides to men they have never met.

Have they made a serious mistake or found the gold at the end of a rainbow?

BRIDES OF THE WEST ANTHOLOGY is a nice collection that shows three very different stories of mail order brides.

SATIN AND SNAKESKIN by Michele Ann Young
Aw, cowboys. Ya gotta love them, and Ms Young does a good job of helping you fall in love with her characters. Not only are they great, but the story has wonderful continuity.

When Jake Redmond meets Tess Dalton, he is ready to return his mail order bride. He imagined a sturdier woman to help him with his ranch. Obviously Tess is not up to the challenge when she doesn’t even know the difference between a ranch and a farm. He can’t help but wonder why a woman from London would answer his ad and Tess refuses to reveal her reason.

Jake’s prickly edges are set on end when his nephews and uncle become smitten with the English lady’s charm. Her homey touches, not to mention cooking skills, make almost everyone forgive her shortcomings. Jake wins no support when he reminds them that the stage will return in five days and Tess will be on it. I really felt for Tess here until I realized the woman had a backup plan. When disaster strikes, Tess shows Jake there is more to his mail order bride than even he requires.

SATIN AND SNAKESKIN was a very enjoyable read even though a few times Ms Young’s word choices sounded modern. Although the ending was predictable, there was an unexpected twist near the end. Jake and Tess are characters that are real and endearing. This type of story is made for rainy, Saturday afternoons. Michele Ann Young has a very nice writing style and is an author to look for.

GRAY WOLF’S BRIDE by Kimberly Ivy
Love, love, love it!! From the first page, I knew this was going to be good, but I had no idea how good.

Set to take revenge on an old love, Gray Wolf McKinnon, now known as Adam Smith, marries by proxy. His new bride will come face to face with her past while facing a future with a man who has grown to hate her. As much a victim as her new husband, Evangeline Payne readies for her new life. Time has not tempered their feelings for each other, and Gray Wolf cannot bring himself to imprison Evangeline. She is free to go but if she does, she must leave with him the son she never told him about. Talk about getting his revenge. How can she leave her son, even if it is with his father? I’m glad this was Evangeline’s decision and not mine, although I was relieved with the outcome.

Evangeline and Gray Wolf are flawed characters that pulled at every heartstring, not to mention Mac, their son. GRAY WOLF’S BRIDE is a sweeping story that has nonstop action and drama. This story is gripping, sweet, tense, and kept me on the edge-of-my-seat. When secrets are revealed, along with a hideous villain that I personally wanted to rip apart, I couldn’t turn the pages fast enough.

GRAY WOLF’S BRIDE is not to be missed. The only complaint I have is that it is not a full-length novel. Pure and simple, I gotta have more of this author.

THE CHANCES ARE BRIDE by Billie Warren Chai
As a mail order bride, Annabelle Yeager has kept her end of the bargain only to find that her intended groom has passed away. While waiting for the next stage heading east, she learns that her fiancé, who was known to everyone as a horrible person, has left her an inheritance, the town brothel.

With nowhere else to go, Annabelle accepts her new business and becomes shunned by polite society. Sheriff Josh Morrow comes to her aid by allowing her to sleep in the jail. Little does he know that this will be the safest place for her. One night, Annabelle outwits some nasty characters by doing the last thing anyone expected.

Although I have to cheer for a woman who thinks on her feet, the connection to the characters was a little distanced. That being said, the overall idea for this story is great, and Ms Chai does a lovely job displaying scenes that allow a woe-be-gone character a chance to triumph.

Jake may be in her corner, and more than a little impressed with her tenacity, but Annabelle’s troubles have just begun. She meets with the disgruntled house Madame, who turns out to be an obstacle to Annabelle’s plans thereby creating another realistic conflict that she has to overcome.

Although THE CHANCES ARE BRIDE did not maintain the same intensity of the first two stories, Ms Chai does a wonderful job of showing the fortitude it took for a single woman to survive the west. With this being my first introduction to Ms Chai’s work, I will look for her again. Her talent for story concept and plot showed great promise.