Review: And There Are Girls You Marry 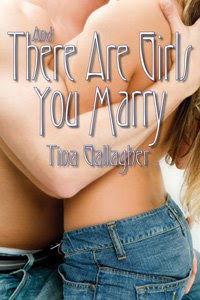 AND THERE ARE GIRLS YOU MARRY
by Tina Gallagher

Ten years have passed since Dan broke Sabrina's heart and crushed her faith in men. Now he wants her back, but can he get her to see beyond his old playboy persona to the man he's become?

Tina Gallagher weaves a wonderful web of words to tell a story about love, trust, and forgiveness and brings home how hard they are to regain when once they are lost.

The idea that a person is a product of his or her rearing is a strong thread in this story. Dan McMullen’s father’s philosophy that there are girls you have sex with and there are girls you marry sets Dan up for years of heartache. Dan’s father practiced that philosophy and pounded it into Dan when he was a teenager. It was a lesson he learned well and paid dearly for in adulthood.

Sabrina Kelly, a physical therapist, wants to make partner in the rehabilitation clinic where she works. When the chance comes, she discovers that old feelings from her college years must be dealt with before she can move on. Dan was the love of her life in college but via the big mouth of a so-called friend, she learned he had sex with other girls while saying he wants to marry her. It broke her heart and destroyed her trust in him. Now, in order to make partner she must become his personal therapist until he is rehabilitated to the point he can return to his professional ball team.

The inner thoughts of Sabrina and Dan take the reader on a journey that reveals the depths of pain and misery they have both endured the past decade. Ms. Gallagher’s writing gives such well-developed characters the reader feels like they are personal acquaintances. One wants to shout HURRAY each time a hurt is healed and good feelings come.

The secondary characters are so entwined with the hero and heroine that they seem absolutely necessary to the story. Of course, little, eight-year-old Lexi is the catalyst that works again and again until the satisfactory results is realized.

AND THERE ARE GIRLS YOU MARRY is a novel hard to put down until one is sure the old problems are resolved and happy-ever-after is a certainty.