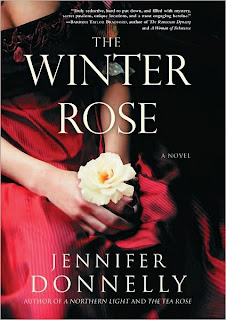 The Winter Rose
by Jennifer Donnelly

When India Selwyn Jones, a young woman from a noble family, graduates from the London School of Medicine for Women in 1900, her professors advise her to set up her practice in London’s esteemed Harley Street. Driven and idealistic, India chooses to work in the city’s East End instead, serving the desperately poor.

In these grim streets, India meets – and saves the life of – London’s most notorious gangster, Sid Malone. A hard, wounded man, Malone is the opposite of India’s aristocratic fiancé, Freddie Lytton, a rising star in the House of Commons. Though Malone represents all she despises, India finds herself drawn to him, intrigued by his hidden, mysterious past.

And before long, even as they fight hard against their feelings, India and Sid fall in love. Theirs is an unpredictable, passionate, and bittersweet affair, and it causes destruction they could never have imagined. Sweeping from London to Kenya to the wild, remote coast of California, Jennifer Donnelly’s epic historical novel THE WINTER ROSE follows the saga of the Finnegan family, who first appeared in THE TEA ROSE.

The second novel in the amazing tale of the Finnegans, The Winter Rose is emotionally gripping and really quite amazing in its scope. This poignant and oftentimes painful love story was incredibly well-written and unbelievably evocative. The Winter Rose draws us into a world of discovery and passion, where morality is not always black and white. The shades of gray are where everything is possible and where everything can go horribly wrong!

India is such an interesting heroine, and I had a grand time witnessing her personal growth. When we first meet her, India is an incredibly idealistic doctor out to save the world. Her fervent beliefs in medicine lead her to jump into situations where she would be much better served by standing back and observing first. She knows what she sees as the right, and has absolutely no problem standing atop her lofty soapbox in order to convey what she sees as truth. As events and the fates conspire to bring her further and further into the world of her impoverished patients, and amazing awakening takes place and the world is suddenly visible in not only black in white but numerous shades of grey. I actually found her courage amazing, wondering what sort of situation she would find herself in next, at least at the beginning. When things started to go wrong, as they so invariably do, I kept rooting for her happy ending, for all her sacrifices to finally be realized and rewarded, and that just makes for a wonderful story.

Sid is your crime boss… with a heart of gold. I’m serious; the man is a good man, who is capable of awful deeds. Sid is a man who has seen far too much of the darker side of life, and has a violent history for a very violent life. The very tale of how he ends up involved in a life of crime is horrifying in and of itself! One can only imagine how he retained any sort of goodness at all, let alone the great well of it that remains inside him. He seems so amoral when he is introduced in this book, that I wondered how he would redeem himself. Sid was a hero that you didn’t really expect to be the hero, someone whose morals have more to do with helping the downtrodden and impoverished people of the East End. Sid is a tortured hero if ever there was one! A man who’d lost so many loved ones in his life, Sid was determined to never love again… until the fearless doctor waded into his world.

This book is an extensive tale that continues the story started in The Tea Rose as well as giving a hint of what is to come. Jennifer Donnelly takes us through the politics of a day and age that seem long gone, but in reality are so very similar to our own time’s issues of political maneuvering, mud-slinging and intrigue. She delves into the perceived morality of those fighting to survive, and makes you think about your own beliefs and actions. Ms. Donnelly has incredible descriptive abilities that keep the story rolling and pulls you right in. More than once I felt that if I closed my eyes and concentrated I could see the people, the places, the situations her words were so vivid.

An interesting and diverse cast of characters add incredible dimension to Sid and India’s story and I couldn’t imagine The Winter Rose without them. From India’s nurse, Ella, who is outgoing and even a bit bossy, to Freddie, India’s fiancé, we are given a gamut of emotions and life experiences that add so much color to an already stunning array of people. That’s not to forget Sid’s own right-hand man, Frankie, or his sister Fiona who is desperate to find a way to bring him back into the loving fold of his family.

The only drawback that I could find in this book was the incredible amount of information I had to try and assimilate as I moved through the various subplots that both revisited previous characters and introduced new ones that would most likely be met again in a future tale. Therefore, a word of warning: this is an Epic romance. This is not a light, afternoon read that will be finished rather quickly. Instead, this is an intense, emotional read that will grab your heartstrings and give them a bit of a twist in the process.

That said; this book has quite a bit to offer. Beautiful descriptions that make you feel as though you are somewhere else. Colorful characters that can make you laugh, make you cry, even make you want to scream in anger. Subplots that keep you guessing and coming back for more, and just about anything you could ask for in an “Epic Historical Romance.” I gladly put this forward as a recommendation for anyone who enjoys all of the above.

4/2/08 Edited to Add: Congratulations to our winner: Sharon B.!
Posted by The Long and the Short of It Reviews at 4:05 PM