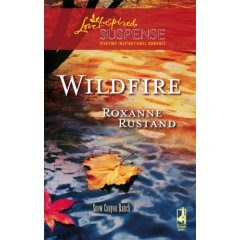 THE PAST KEPT HAUNTING HER...
Josh Bryant was back in tiny Wolf Creek. Which meant tour guide Tessa McAllister now had more to fear than drought, wildfire and underhanded rivals. Years ago the handsome photojournalist had broken her heart, leaving her with a secret to harbor alone. And now he was back in her town. Distracting her. Making her remember what they'd shared. But someone was watching them, waiting for the moment to strike. Someone dead set on destroying their hope for a second chance.

Roxanne Rustand has done it again in this final episode of her Snow Canyon Ranch trilogy.

Tessa, the third sister in the McAllister brood, spends her time on her beloved Snow Canyon Ranch and conducting tours. Between a rival wildness outfitter company trying to buy her out, cattle going missing from her working rance, and drought conditions which make every outing a potential for problems from stray sparks from camp fires, Tessa has enough on her hands. But then, a ghost from her past shows up in the area and, worse, she has to take him in after he has an accident.

Is it just coincidence he's there, or does he have a more sinister reason for staying around? Can Tessa fight the attraction she still has for him while keeping the secret no one in town knows?

Roxanne Rustand does a wonderful job creating characters you just like. Tessa is feisty and willing to fight for what she believes in. Claire, the matriarch of the family, isn't as much a part of the story as she was in the previous two. I took longer to warm up to Josh than I did the male characters in the other two books, but he proved himself to be an engaging hero.

Roxanne does a good job of hiding the identity of the "bad guy," although looking back over the book when I finished, there were hints.

This is definitely a satisfying end to the Snow Canyon Ranch trilogy and I'm looking forward to Roxanne Rustand's next outing.

Edited to add: Congratulations to today's Book-a-Day Giveaway winner: Teresa W!
Posted by The Long and the Short of It Reviews at 3:19 PM