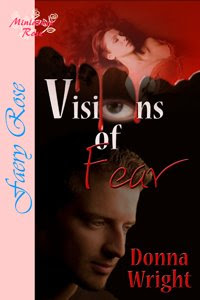 Visions of Fear
by Donna Wright

Seven missing women, one determined FBI agent, and an artist who have Visions Of Fear.

Woodland Glen is an artisan community where Mason Fletcher lives his life uneventfully. Until one by one, beautiful women—both local, and tourists—begin to disappear. Enter the FBI Missing Persons Task Force in the person of Jo Caldwell, who isn’t the least bit impressed that Mason has visions of the crimes. Can Mason protect Jo from the same fate as the other women and his heart at the same time?

This thriller takes place in one of my favorite vacation spots, the Smoky Mountains, and is the perfect contrast to the terrifying events taking place in sleepy Ramsey County, Tennessee.

FBI agent Josephine Caldwell is trying to catch the monster that is abducting women and is determined to prove her distinction, especially to Mason, an ill-mannered local artist. Her "I'm a tough FBI agent and you better respect me" attitude is justified to an extent — woman agent in a small southern town — but she overplays it just a little, in my opinion, and comes off as harsh. Luckily, she chills out pretty quickly and her personality moderates in a way that is realistic to the situation — tenacious yet vulnerable — and she becomes more appealing to me as the story progresses. She is described as very beautiful but she seems totally unaware of it, and I liked that about her too.

Mason has a slew of qualities that would turn my head — tall, dark, handsome; a low seductive voice and a mesmerizing smile. The psychic visions that bring him to his knees with debilitating headaches and occasional blackouts might be a bit off-putting, but sometimes you have to take the good with the bad! I wasn't surprised by Jo's skepticism of his gift — in her position, she would need to be. The sheriff goads Jo into giving Mason a chance which worked really well for me because the gentle coercion forces her to consider possibilities on the case she wouldn't have otherwise. It also allows her to admit that Mason is incredibly hot, and a mutual intimacy begins to grow. I was pulling for Mason as he began his steadfast pursuit of Jo.

The villain revelation is startling, but I realized in retrospect that tiny clues are sprinkled throughout which enhanced my reaction and enjoyment at the unveiling. "Visions of Fear" is a fast-paced crime drama with interesting characters and compelling suspense that is truly satisfying.

Posted by The Long and the Short of It Reviews at 4:14 PM