Review: Valentine's Day Do Over Part II: The Siblings 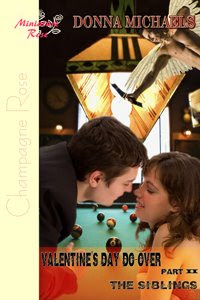 Valentine's Day Do Over Part II: The Siblings
by Donna Michaels

Mia doesn’t have time for irresponsible men in her life and is not happy to discover she’s stuck in a repeat Valentine’s Day with the handsome, yet chauvinistic Captain Racine Hartt. With her sister’s wedding day in jeopardy of never arriving, Mia looks for someone else, anyone else other than the sexy Captain to fill the slot.

How many days will it take this military minded couple to look past their preconceived notions and see into each other’s hearts? Can Eros accomplish this miracle? Or will the world repeat Valentine’s Day forever?

I don't think I've seen two more inept people in the game of love, but the antics they engage in to deny the inevitable are hysterical and kept me in stitches.

Mia is a stunning, intelligent Army Major and I liked her right away because there is no guile about her when it comes to men. She admits her weakness for hard-bodied military men, but also recognizes that they are bad for her, based on several previous misfires. I also appreciated her honesty in expressing longing — at least to herself — to have the kind of love that her soon-to-be-married sister has found. So I could easily understand her deliberate dismissal of her carnal thoughts inspired by Race as I got to know him.

I probably shouldn't have found anything redeeming about Race, but I thought he was adorable. Buff and slightly surly, he is frank about his playboy, confirmed-bachelor lifestyle. I got the impression that he doesn't deceive women into thinking he is something he isn't, such as marriage material. Though maybe not necessarily admirable, his upfront approach kept me from viewing him as a total rake.

Fighting their own personal demons as well as the mounting attraction, I cracked up as both Mia and Race try all sorts of outlandish things to try to stop the day from repeating yet again — everything but fulfill their destiny. Eros and Aphrodite are pretty funny too as they periodically check in and show their frustration at how Mia and Race are bungling their future and are forced to live Valentine's Day over and over (and over and over) again.

"Valentine's Day Do Over: Part II" is a silly, feel-good tale about second (and third and forth, and so on...) chances. After a tough day, this is the perfect pick-me-up story guaranteed to make you smile.

Posted by The Long and the Short of It Reviews at 3:04 PM