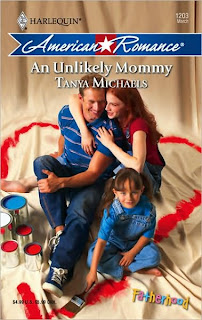 An Unlikely Mommy
by Tanya Michaels

As Joyous, Tennessee's only female mechanic, Ronnie Carter is more used to fixing carburetors than dressing for a date. So when Jason McDeere asks her out, she's thrown into a panic! Not only is the handsome high school teacher Ronnie's secret crush, he's the single father of an adorable toddler...who wants a mommy.

A tomboy in overalls isn't the role model Jason had in mind for his young daughter. But the better he gets to know her, the more he's convinced that Ronnie's exactly what he's looking for. He has no doubt she'd make the ideal mother for Emily.

But is he the perfect family man...for her?

Tanya Michaels, one of my favorite Harlequin authors, has created a family to love. Ronnie Carter is the only girl in a family of men: her widowed father and overprotective brothers...who have made it their goal in life to protect her from the wrong kind of men. Unfortunately for Ronnie, that has meant every man she's ever met. That is, until she and Jason McDeere start going out.

Her father falls in love with Jason's two-year-old daughter and her brothers think he's perfect for her. Ronnnie does as well, until she realizes that being involved with Jason means also being a mother to Emily, whose birthday wish is for a new mommy. But, Ronnie has just moved out of the house on her own for the first time and is not at all sure she's ready to give up her independence to take care of another family.

I enjoyed getting to know Ronnie and Jason. They are just likable people and you find yourself cheering for them as they try to decide not only what is right for the two of them, but what is right for Emily as well.

The struggle Ronnie goes through as she sorts through her feelings is complicated by her attraction to Jason and Tanya Michaels does a great job in drawing the reader into Ronnie's dilemma. And, with an added complication, the reader doesn't truly know until the last minute what the outcome will be.

If you want a tale that's heartwarming, An Unlikely Mommy is one you will enjoy. I recommend it for a quick read on a summer afternoon.

Congratulations to Dena - today's winner of the Book-a-Day Giveaway!
Posted by The Long and the Short of It Reviews at 8:19 PM