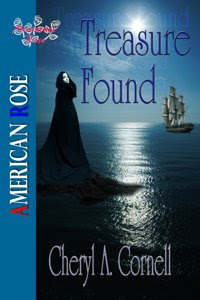 Treasure Found
by Cheryl A. Cornell

Captain Ormond was a practical business man in the mid-eighteenth century, with a notorious lineage he struggled to shed. Zerinda was a beautiful woman, physically and emotionally scarred. While sheltered, she had confidence and spirit, the qualities his wife would need to thrive aboard his ship. With one glimpse, he knew she was what was missing from his life. He had to convince her she was his true treasure.

I very much enjoyed this tale of sea captain Edward Ormond and the woman he falls in love with, the scarred and lonely Zerinda Prescott. Zerinda is exiled from her family’s estate for one month each year, while her sister holds a Valentine’s day fete and searches for a husband. Zerinda, scarred from a terrible childhood accident, has learned to live in solitude – until Edward anchors his ship and ventures onto her side of the island.

From the moment the two meet, they are drawn together. I thought the attraction, both emotional and physical, was well written and convincing. Though their romance and courtship lasts only a few days, which would have been unconventional in 1747, Ms. Cornell makes the circumstances believable.

The setting – a lonely island and a desolate hut – becomes a refuge for both Zerinda and Edward. When Edward does visit the Prescott estate on the other side of the island, the contrast between those two lifestyles, and a loveless marriage versus one filled with passion, becomes obvious.

Treasure Found builds to a satisfying conclusion, complete with several pages of steamy love-making. Just a few editing errors kept me from giving the story a higher rating. Overall, however, I enjoyed this brief historical romance and felt fully captivated by the eighteenth century life of a rogue sea captain and his one true love.

Posted by The Long and the Short of It Reviews at 9:54 PM