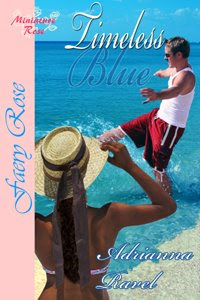 While vacationing in the Caribbean one summer, Jordan Brentwood meets Renee Carlson, a woman who is instantly captivated by him yet keeps her heart heavily guarded. Jordan isn’t used to chasing after what he wants, but something about Renee intrigues him.

Once Jordan realizes that Renee is his one and only love, he suddenly loses her in a car accident that changes his life forever. He falls back into his old womanizing habits, lasting until he is an aged man in his 70's. Technology has progressed and time travel is now possible thanks to a prosperous new corporation. Jordan is given the ability to find and save Renee, the woman he met on a beautiful paradise island in the Caribbean, while finally taking control of his future from under his proud father.

But can the past truly be changed?

Gorgeous playboy Jordan Brentwood meets his match in free-spirited, Caribbean island dweller Renee Carlson. Though an interracial romance isn’t the easiest thing to navigate in that day and age, these two fall for each other the minute they meet. Despite the obstacles that stand between them, including Jordan’s uptight father, Jordan’s own future as a doctor, and Renee’s doubt that there are any good guys left in the world, they manage to find true love.

An interesting twist is the way this story begins: thanks to technology, a seventy-year-old Jordan has the chance to relive his life and spend it with Renee, the woman he does not choose the first time around. Unfortunately, I felt the first few pages of this story were bulky and weighed down by this explanation. I also thought the author might have used the elements of déjà vu and second chances more consistently throughout the plot.

Jordan and Renee are likable characters, if a little stereotypical. I wasn’t convinced that after a few days and a few kisses, they were madly in love, though the bedroom scenes are steamy enough. The setting – Miami and St. Thomas – does lend itself to a sensual love story, and the details of the island are well written. The minor characters, including Renee’s sister, Lauren; Renee’s doctor, Malkia Westmore; Jordan’s current plaything, Sheila; and Jordan’s own father, are all fleshed out nicely.

A sweet if predictable love story, Timeless Blue will sweep you away for an hour or two and remind you that there are no second chances in life: make those choices of the heart wisely!

Posted by The Long and the Short of It Reviews at 4:29 PM