Review: Shaking Off the Dust 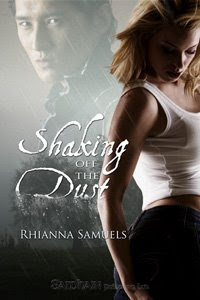 Shaking off the Dust
by Rhianna Samuels

Hannah’s list: Ghosts are cold to the touch. Being tied up isn’t much fun. And danger is a sure-fire prescription for amazing sex!

When Hannah Campbell attends a memorial service for the neurosurgeon who once saved her life, the last thing she expects is a lightning strike that knocks her out cold and blasts her lungs full of the departed’s ashes. Things only get weirder when she wakes up to find the deceased standing over her hospital bed, insisting she help him track down the terrorists who blew up his plane.

Professor Takeshi Shimodo doesn’t know what to believe when smart-mouthed Hannah appears on his doorstep, claiming to be haunted by the ghost of his best friend. Yet she exhibits some extraordinary psychic abilities. And her determination to find justice for the crash victims, in spite of her fragile health, touches his heart.

Takeshi’s acupressure techniques are meant to calm Hannah’s erratic heartbeat, but the longer they are together, the more his magic fingers have the opposite effect. Soon, their passion flares hotter than any lightning strike.

But now the terrorist they seek is hunting them. And the FBI is suspicious Hannah knows just a little too much.

Without some “spiritual” help, they haven’t a ghost of a chance.

Defying any easy categorizing, "Shaking off the Dust" offers an unusual and unique story line, powerful, occasionally overwhelming emotions, and and a mystery wrapped up inside it all. Even though the suspense will grab you, there are many light moments, and humorous dialogue is to be found throughout.

Miss Hannah Campbell's day starts out in sad retrospective, yet she is swept along an unpredictable course at once. Whether you believe in ghosts or not, the appearance of a certain ghost here is - strangely- plausible, and carried off very well by Samuels.

The array of emotions Hannah feels is heightened by confusion, her injury, and pain; and that's just the start! Because this ghost is both puzzled and demanding, and Hannah has a certain obligation to him, when you get right down to it. That obligation will set her on the trail of murderers, perhaps even terrorists. She won't be alone, although Dr. Shimodo might be more of a distraction than a help!

The delicious Shimodo can't claim all her attention, as Tom, the ghost never lets up. He is even to be found sleeping on the foot of her bed. Hannah and Shimodo's desperate efforts lead them to uncover an unspeakable plot, at great danger to themselves. Along the way, they really discover one another. Never mind sexual tension - the actual sex scenes make this one steamy thriller. Well written and continually engaging!

Posted by The Long and the Short of It Reviews at 5:07 PM