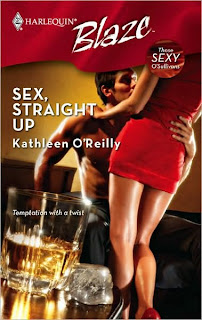 Sex, Straight Up
by Kathleen O’Reilly

Meeting a handsome loner on a deserted beach in the Hamptons was like being his by lighting. One steamy weekend in bed with Daniel O’Sullivan and Catherine Montefiore was marvelously woozy from a delicious cocktail of sun, sand and superhot sex.

Abruptly, though, Catherine’s forty-eight hours of fun are at an end when her family’s exclusive auction house is hit by a very public scandal. She’s ready to step in and save the day, but she’d hoping Daniel, her hot Irish hunk, will lend a hand. After all, he’s got the necessary skills an d, straight up or not, Catherine wants another long drink of Daniel before another forty-eight hours are up and her legacy is lost forever!

Okay, once again, I am completely and utterly taken by surprise while reading a Harlequin Blaze book. Looking at the cover, title and blurb… I was expecting lots of heat and a bit of a mystery or suspense worked in. Don’t get me wrong, that’s exactly what I got, but I also got so much more. This book was so incredibly poignant and moving that I am again having a very hard time giving up a book for giveaway!

Catherine Montefiore could quite possibly become one of my favorite characters, or best friends at that. Again, not what I expected when I picked up this book, and what a wonderful surprise. Catherine is a lover of art in all it’s many forms, a woman with less-than-stellar self-esteem who is incredibly faithful to her family and friends, but is also so very lonely. She has always felt a bit out of place among her rather flamboyant family, and I just adored how she had finally reached the decision that she would be who she was and her family would just have to love her for who she was. Not that they didn’t anyway, but her determination to be true to herself was admirable. When she spots Daniel on her beach, looking just as lonely as she has always felt, if not more, she is drawn to him. Her insecurities cause her to observe from a slight distance, but it’s not enough to keep Daniel from noticing her.

Daniel O’Sullivan is straight-laced and somber as they come. He is a truly tortured hero, who isn’t truly free to have feelings for Catherine. At least that’s his take on the situation. He is a man who has suffered a truly horrible loss and my heart just ached for him. He has lived in his own private hell for seven years and until Catherine stepped into his line of sight, there didn’t seem to be any sign of a light at the end of the tunnel. Even then he was convinced that nothing could possibly come of it. His attraction to Catherine was so amazing to watch as he tried to fight her draw. It didn’t take him long to realize that it was a losing battle, as Catherine brought her own source of light to his darkness. He’s utterly helpless in the face of his attraction for her, and I could understand his struggle, but I can’t go any more into it. Needless to say, his story and his struggles are incredibly compelling and will have you firmly on his side, even when you think he’s being a fool. Throw in his “Greek god” looks and you have a truly hot and lovable hero that you just have to see to believe.

This book was so much more than just another hot tale of sex turning to love, even though that WAS a big part of it. The emotions and events it touched on were spellbinding and besides having my heart pounding, it brought tears to my eyes as well as a smile to my face. I could go on and on about how moved I was by certain aspects of Catherine and Daniel’s relationship, and the inevitable move from lust toward love that started from the moment they realized that there was more to the other person than just a sexual encounter. There were moments of levity that made me laugh, I don’t want you to think this was all about the hardships, and there were a few, but it was mostly a moving tale of two people finding each other. I have nothing but praise for Kathleen O’Reilly and this amazing book, and would urge you to give it a chance, you won’t be disappointed.

Edited to add: Congratulations to Dru Ann -- today's winner of the Book-a-day Giveaway!
Posted by The Long and the Short of It Reviews at 4:17 PM