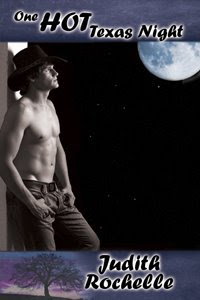 Tate Donovan was sure The Yellow Rose would be his when his father died. After all, he’d grown up there and it was his legacy. But Abby Culhane was King’s stepdaughter for many years and held a place in the old man’s heart right up to the end. When King leaves her one fourth of the ranch and Tate’s grandparents’ home, Tate is shocked. Then he sees the grown-up Abby and can’t decide whether he wants to fight her over the will or take her to bed. The entire town of White Tail, Texas rolls up its sleeves.

ONE HOT TEXAS NIGHT, like many things with Texas in the name, seems exaggerated at times, but it does make for an emotional read that captivates.

Hot tempers that match the Texas summer heat soar at the reading of King Donovan’s will. Two emotional, headstrong personalities, Abby Culhane and Tate Donovan, neither willing to give an inch, lock horns. Their past history of hurts and denied love colors their outlook on life and their response to each other.

The reader lands right in the middle of the foray and is privy to the tension, determination, and outrageous actions of these two intelligent adults who wage a war with juvenile tactics but for very adult stakes. Their antics are rather humorous but begin to border on ‘too much’ just as the story takes a turn.

Uncertainty, guilt, lack of trust, pride, and bravado established firm barricades that are difficult to breach. Only after these emotional wounds are opened and allowed to heal can new feelings find purchase. While Abby and Tate work their way through old and new problems, the secondary character make the story seem so real with the human things they do and the loyal, helpful friendships they offer.

Abby’s recent life in New York furnishes another conflict that finds its way to Texas. Sam, whom Abby dated and who is the son of her former boss, is such a pain-in-the-neck and working his way down. He is an antagonist one loves to hate, yet he, unknowingly, helps solidify the connection between Abby and Tate that has simmered since childhood.

The graphic sex scenes certainly show without a doubt that Abby and Tate are drawn to each other in a primal way that adds another dimension to the love they’ve denied for so long.

This novel is humorous in places, giving relief to the trials and tribulations of strong personalities stumbling their way to a phenomenal love. It kept me turning the pages. I do love a Happy-Ever-After and Judith Rochelle delivers in ONE HOT TEXAS NIGHT.

Posted by The Long and the Short of It Reviews at 7:39 PM