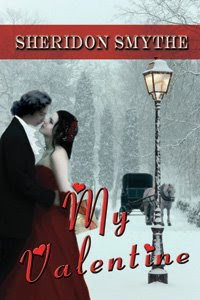 MY VALENTINE
by Sheridon Smythe

Delivering Valentine’s was an unusual job for a lady, but Rosalyn Sue Mitchell had lots of newfangled ideas. Rosalyn – affectionately known as Cupid – liked her job and her independence. But she was downright tired of hearts and flowers. She longed for the love her valentines helped bring to everyone else, the love her friends were always urging her to find. Then a handsome gentleman from New York City came to town and dedicated himself to getting Rosalyn into the spirit of the holiday. Dark, charming Christian Garrett would make Rosalyn his – as long as she didn’t find out who he really was.

MY VALENTINE is the story of an energetic, good, young woman working in a unique business at a time when women in the business world were a novelty. Rosalyn Sue Mitchell, known as the local “cupid” rushes about delivering love notes, baskets, flowers, etc. and often must wait for an answer from the recipient of the gift. She’s become rather ambivalent about love after seeing the reactions of her customers.

Her past becomes a mighty force in her life when she meets Chris Brown, a rich, handsome man who comes to town on a secretive mission. Their two very different worlds collide as he maneuvers to obtain her most treasured possession believing it rightfully belongs to his grandmother. Christian Garret, a.k.a. Chris Brown does not present the best side of his personality early on.

As Christian insinuates himself into Rosalyn’s life, attraction then interest and finally love weave a web that entangles them both until the once-important issues in each of their lives are realigned giving them new priorities.

The secondary characters help propel the story along and are instrumental in revealing more about the hero and heroine, but I felt like I was just told about them then rushed into the carriage with Rosalyn and Christian again and again. I really wanted to be shown more of these interesting characters.

MY VALENTINE touches the reader’s emotions on many levels. It also brings to light social conditions of that period in history and reminds me of the changes that have come about for women over the years. The humor that creeps in at times makes this a delightful novel to read. Of course, the untangling of the plot so we can have a happy ever after is not to be missed.

Posted by The Long and the Short of It Reviews at 3:05 PM