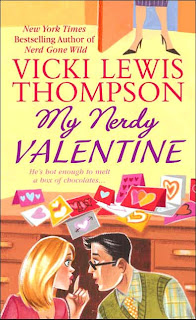 Aspiring psychologist Amanda Rykowsky’s schedule is certifiable. Between study, bartending, and an internship with a sex therapist whose techniques would
make a Playboy bunny blush, there’s zero time for romance. Still, Amanda is flattered to receive an anonymous Valentine…until the messages take a sinister turn.

Stockbroker William Sloan swears he’s not the one sending Amanda cards, but he suspects the culprit’s intentions are more dubious than sharing a box of Godiva. Something about gorgeous, determined Amanda brings out the usually reserved William’s inner he-man, and he insists on acting as a decoy boyfriend. With a fake relationship masking some very real lust, it’s only a matter of time before William and Amanda give in to the sweetest of temptation¬s. And once he’s dealt with her secret stalker, William’s next mission is to strike Amanda with Cupid’s arrow….

Amanda Rykowsky has the worst job in the world. She is the assistant to an oversexed sex therapist. Sounds like fun, but it’s not. Her personal life is
non-existent, her boss has her run embarrassing errands and when she finally meets a guy she can sink her teeth into, her boss wants him for herself. But, when things start to go very wrong for Amanda, the sexy nerd down the hall steps in to help Amanda out. Self-sufficient Amanda has to accept his help and risk her boss’ wrath.

William Sloan is your normal average boring stockbroker. He is a nerd. When he stumbles over Amanda on the stairs, carrying some very interesting goods, he realizes that he wants Amanda in his life. Her boss keeps getting in the way, however. Oh, and there is the issue with that pesky secret admirer. So the nerd and the overworked assistant come up with a plan.

I loved this book. This is another great “Nerd” book from Vicki Lewis Thompson. She has an amazing skill of making nerds the sexiest brains on the block. With
witty and very sexy banter she makes a nerd seem like the guy every girl should want. Ms. Thompson also has a way of writing some very interesting secondary
characters. And who knew working for a sex therapist would be so stimulating. I would recommend this book to anyone in need of a good laugh, because, laughs
are plentiful in this very sexy romp. So sit back, relax and enjoy the wild ride.

Edited to add: Congratulations to Karen H - today's winner of the Book-A-Day Giveaway!
Posted by The Long and the Short of It Reviews at 3:23 PM