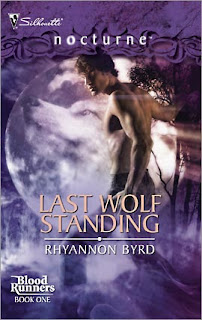 Five seconds earlier, Mason Dillinger would have sworn it could never happen…

That a woman who was his perfect match even existed. And that he'd find her in a bustling café. Yet just the scent of sweet, mortal Torrance Watson ignited a driving, explosive need to claim her that he knew his pack would never sanction. Worse, the rogue werewolf he'd been hunting had sensed that attraction and made Torry his prey. Forced to safeguard her from this ruthless assassin, who already posed a threat to his pack, Mason now faced the ultimate challenge. Did he have the courage to cross the line by sealing the blood bond that would make Torry his alone—a disloyalty few of his kind ever survived—or would he live an eternity without love?

This was my first Silhouette Nocturne...which is odd, because I really enjoy paranormal romance. I've been meaning to read one (or more!), but nearly every time I've gone to buy one, it's the middle book of a series and I refuse to read series out of order. Call it a quirk. A couple weeks back, I saw this one, and lo and behold--it was BOOK ONE!

I bought it faster than you can say "Bob's your uncle" and dove right in. I tend to prefer the more light-hearted paranormals, and have heard Nocturne can be a bit dark, so I wasn't sure what to expect. To my utter enjoyment, this book starts with our hero sensing (and scenting) his mate in a crowded cafe. He doesn't know who she is or what she looks like, just that she's there somewhere. Finally...

Time seemed to stand still as she walked toward him, his lungs burning while the top of his head felt about ready to come off. Within seconds she was in front of him, without even having glanced in his direction. With an utterly foreign sense of desperation, he did something that he'd never, in all his thirty-three years, thought he would do.

So, though this book is certainly no comedy, it has several moments that made me smile. Mason and his partner, along with other half-breed werewolves, called Blood Runners, are hunting a rouge werewolf. That's their job. In order to "earn" their way into the pack of full-bloods, they have to rack up so many kills. However, this rouge wolf is different: he can fully change in daylight, mask his scent...and he's targeted our heroine, Torrance.

Mason doesn't want to fall in love. He's seen how it destroyed his brother, and how his parents literally live for one another, so he spends most of the book fighting his emotional feelings for Torry. He's just fine with "mating" with her, but don't let those pesky emotions get involved.

Torry, on the other hand, is a dreamer. She believes in, and fully expects to find, someone to love, who will love her right back, and she's not willing to settle for less. She's both soft and stubborn and I like that she's determined to save her own skin, won't take any guff from Mason, and yet she has such great compassion for people. Torry is truly a heroine to admire.

And the tension. Wow. Seriously... these two are driven to mate, yet fight it every step of the way. The author uses every one of their senses to show the depth of attraction and it twisted my gut: when will they give in to this passion and emotion that is tying them both into knots?

I thoroughly enjoyed this book and didn't want to put it down. I read it as quickly as I've read anything lately. It's suspenseful, funny, full of interesting secondary characters, has a solid plot and is well written. I've already run to the store and grabbed the sequel to this book.

Rhyannon Byrd has a wonderful writing style. She's a new-to-me author, but not anymore. I have every intention of finding her backlist and devouring it as well.

If you enjoy a good, hot paranormal chuck full of alpha-wolves, and an intriguing plot, I highly suggest you pick up this book. I don't think you'll be disappointed.

CONGRATULATIONS TO OUR April 1, 2008 WINNER of "Last Wolf Standing": JEANNE S.!!
Posted by Long and Short Reviews at 6:12 PM