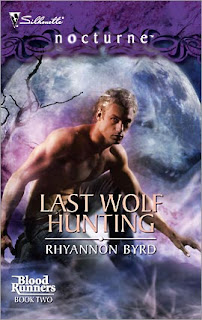 Coming home, Jeremy Burns realized his life had all been an act.

As if sending the next rogue back to hell was his life's mission. But after seeing Jillian Murphy for the first time in a decade, Jeremy knew he could no longer ignore his desire. By rights of nature, the Spirit Walker belonged to him. Yet fate and fear had worked against these two headstrong lovers in their youth—and cast the Bloodrunner from his home.

Now Jeremy and Jillian must join forces to uncover the betrayal that threatens to destroy the pack's stability. And when they're done—well, Jeremy's not about to again deny himself the one thing he wants most in this world.… Jillian belongs to him, and this time his little witch is going to know it!

Blood Runner, Jeremy drew the short straw at the end of the first book in this series ("Last Wolf Standing") and must return to the pack and claim his rightful place there in order to investigate which of the pack leaders has turned traitor and is encouraging rogue werewolves to viciously attack and murder humans.

Rejoining the pack is the last thing Jeremy wants to do. Aside from the fact that they look down on him because he's not a purebred wolf, he also has to face Jillian, the Spirit Walker who is also his lifemate.

This book starts of with a bit of humor and a heavy dose of excitement from the moment you crack the cover. I love Cian, the Runner who accompanies Jeremy back to the pack, and his dry humor really starts the book off well. However, the pack sanctioned duel between Jeremy's lifemate and an old girlfriend really moves the story along.

At first I thought the "bad guy" was far too predictable and found myself disappointed, but was surprised by a little tidbit about this near the end of the story that made it clear I didn't know everything I thought I did!

I thoroughly enjoyed the relationship struggles between Jeremy and Jillian, including the very believable conflict: he hates living in the pack and can't stay, she is the Spirit Walker to the pack and can't leave. There are also suspicions on Jillian's part about whether Jeremy can be faithful, again quite understandable based on his playboy past. Jeremy is driven to mate with Jillian, but wants to wait until she's certain of his love. The tension between the two of them is strong, hot and well-written.

Though this book can stand alone, I believe it will be far stronger and more satisfying when read in conjunction with the first in the series and I recommend that you pick up all of the "Blood Runners" books... they are exciting, very sexy and, I'm betting after you read them they'll earn a solid place on your keeper shelf.

Edited to add: Congratulations to WindyCindy -- today's winner of the Book-a-Day Giveaway!
Posted by Long and Short Reviews at 12:17 PM