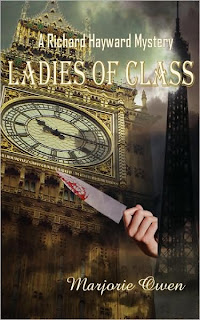 Murder is no respecter of persons…

Richard Hayward’s promotion and move from the big city life to the sleepy town of Burshill, England, has been shattered. Sir John Bury needs a murder solved.

The results of Richard’s investigation cause a ruckus when several ladies of a particular ‘class’ become part of the inquiry. As the facts begin to unfold, they not only amaze Richard, himself, and the community of Burshill, but extend all the way to the top brass of Scotland Yard.

This story has a solid attention getting beginning. Even better, it will keep your attention throughout. I couldn’t stop reading it and kept coming back to it again and again until I had read the whole thing. That’s my criteria for a good read. The first “random killing” turns into a series of murders. The plot twists and turns always keeping you on your toes waiting for the next unexpected event. You won't want to put it down.

The story takes place in England and the setting, scenes, speech and behaviors of the characters leave no doubt that you are in England. It’s all very British, very proper. The first chapter with it’s description of the fog leaves no doubt about where you are.

The characters, from the first murdered woman, Laura and on, are all quite believable. Following the clues and piecing it all together leads the detective to span several continents in search of clues. Richard Hayward lets you follow his musings as each murder cuts him off when he starts to close in. It’s plain to the reader he is having his own personal problems and tries his best to keep focused on the case. His mother, a dog, the murdered woman’s son are woven into the fabric of the story and provide several more stories that run side by side with the main theme. You are never at a lack of a thread to follow.

I liked it tremendously. The author's own story also caught my sympathy. Imagine all these stories written by a woman with no one being really aware of her doing them until after she died. Thanks to her son and daughter-in-law, I look forward to reading more.

Posted by The Long and the Short of It Reviews at 7:36 PM