Review: Knock Me Off My Feet 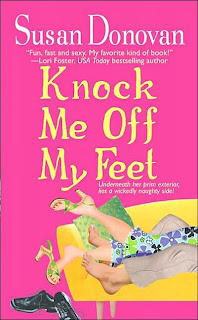 Knock Me Off My Feet
by Susan Donovan

WHEN YOU MIX ONE PART BUSINESS

Autumn Adams never planned to follow in her mother's footsteps as Chicago's answer to Martha Stewart --she can't cook, doesn't clean, and would rather play soccer than discuss the joys of white bathrub grout. Then some lunatic starts sending her threats in the mail and Audie finds herself under the protection of simmering, sexy Detective Stacey Quinn, a man determned to examine her every nook, cranny, and ex-boyfrined in his effort to find the stalker. A disarming combination of macho cop and sweet charmer, Quinn is hard to resist. But with Audie's bad luck at finding and holding on to Mr. Right, she thinks it's best to keep her distance ...


WITH ALL PARTS PLEASURE

Quinn soon discovers that the real Audie is an alluring blend of fantasy babe and tender-hearted female all wrapped up in what he can only hope is leopard-print underwear. She's not what he's always pictured for himself, but could she be everything he'll ever need?

THINGS CAN GET DOWNRIGHT DELICIOUS

Digging through Audie's many layers could turn out to be the hotteest, craziest, sexiest bit of detective work Quinn has ever attempted ... if it doesn't kill him first.

Knock Me Off My Feet is a fun and quirky story spiced with a hint of danger, flavored with humor and served with a decadent dose of romance.

Autumn (Audie) Adams is such a klutz; I loved her character. She takes her trips and tumbles in stride yet she's a fire cracker on the soccer field. I was impressed with her handling of the scary stalker notes. Too often I read about how a heroine will get a suspicious something and never says a word about it to anyone until it's almost too late or beyond late so it allows some nefarious deeds to occur that never would have if the heroine just opened her mouth. Drives me nuts. Audie is written a lot smarter than that and I can't tell you how happy that made me. Oh, I just did. Anyway, her humor, her drive and her commitment to a promise she wished she never made, make her a character of worth and dimension. Audie is also feisty when she defends someone she loves. I got a kick out her altercation with... well, it actually went from fisticuffs to romance in a heartbeat. If I mention any more, I'll spoil it for you.

Quinn is clearly a hero worthy of both Audie and reader to fall in love with. His sensual Irish ways and his talented bagpipe blowing will have you swooning or at least totally fascinated with him. Personally, I think there should have been a joke somewhere about his being "Martin" Stewart-- he's so accomplished, and it provided a few good laughs and snickers for me as well as a few thoughts of "Where can I find a guy like him?". Stacey Quinn is a clever cop, a hunky man and a dedicated good guy. He's also a hero who appreciates family and isn't above playing silly with his nieces and nephews.

The story isn't all lightness and fun. There is a dastardly villain messing with everyone. I liked how it slowly built up and had me bouncing back and forth between characters to try to figure out who the nutso was. Ms. Donovan put in a lot of suspects for me to chose from and they all made sense. Actually, there is a villain and a half but you'll have to read to figure out how someone can be a half a villain. The big villain was truly heinous and I was shocked as to the scope of the plan.

There are many other details that I could go on and on about because Knock Me Off My Feet is such a full-bodied story that I'd be plying you with spoilers if I wrote anymore. Suffice to say, this story totally had me invested in Autumn's and Stacey's HEA from start to finish. And the finish was a sentimental delight that just warmed my heart and left me smiling.

Edited to add: congratulations to Pam P. -- today's winner in our Book-a-Day Giveaway!
Posted by The Long and the Short of It Reviews at 7:41 PM