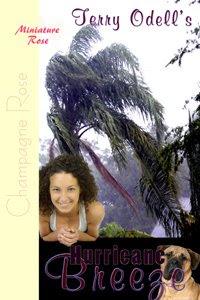 Carter Worthington IV is the kind of man whose schedule is laid out in fifteen minute increments, while Tiffany Breeze wouldn't know what to do with a day planner if she owned one.

Carter thinks he's happy, tucked away in a quiet Florida neighborhood, where nobody knows his alter ego is novelist Grant Gardner, and he's content to keep it that way. But when a hurricane blows Ms. Breeze into his sheltered universe, he must deal with his past, overcome his fears and decide if he's spent his life existing instead of living. Is he willing to leave the emotional safety of his orderly existence to experience the highs, knowing he'll also have to face the lows?

When a character is named Carter Worthington IV, I pretty much know I'm going to meet someone with a silver spoon in his mouth and potentially a stick up his... well someone that is rather stuffy. And that is how I see Carter in the beginning from the subtle references to the rules of his rigid, upper-class upbringing. But I also sense from him that although engrained since childhood, he isn't really comfortable with his current belief of how he should 'behave'. I think Ms. Odell did a great job in showing that Carter was starting to question his plastic reality before his first encounter with Tiffany, which makes his behavior after meeting her all the more natural and plausible to me.

Tiffany Breeze, or Tiffie as her friends call her, is an opposite personality from Carter. A free spirit with no entanglements, I think the post-hurricane setting (and perhaps her name?) is a metaphor for how she breezes into Carter's life and bowls him over. What makes her so appealing to me is how Carter reacts to her, doing and thinking things way outside of his comfort zone. His charm factor increased for me as I watched his feeble attempts at denying her affect on him and it was even more fun to see him succumb. I loved how he breaks out of his norm and becomes comfortable with feeling and expressing his emotions, releasing his stuffy persona for good.

I enjoyed this engaging story. Characters that grow and become better people during their journey make a story much richer for me, and "Hurricane Breeze" provides that and much more.

Posted by The Long and the Short of It Reviews at 4:10 PM