Review: Houston, We Have a Problem 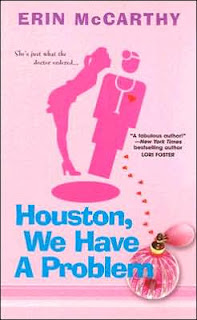 Houston, We Have a Problem
by Erin McCarthy

Dr. Houston Hayes has never had trouble maintaining his professional distance ... until he meets resident Josie Adkins. Every time she drops a chart in his presence, he's treated to a view that makes him extremely interested in her bones. Jumping them, that is. For a man who prides himself on control at all times, this is a problem...

All her life, Josie has wanted to be a surgeon. But how can she do that while she's suffering from the debilitating Dr. Hayes induced Dropping Medical Equipment Syndrome? And then Dr. Hayes prescribes a cure: one night of sheet-burning passion to erase the tension for both of them . But only one night ... he won't need more than that ...

Suddenly, Josie has her mission -- a chance to prove to the arrogant Dr. Hayes that one night with her will never be enough. And soon, both doctors may be falling into a desire deeper than any they've ever known ...

Houston, We Have a Problem is a fun and hilarious romp through the landscape of love. The romance focuses on a pursuit riddled with bumps as two people come to realize that the simplest things can turn a man to mush and a cute woman into an irresistible siren.

Josie is adorable. Her sense of humor is a treat and I couldn't help but like her character. I found Josie refreshing because she's not a stereotypical slim woman but a woman with curves, perhaps more than is usually written about and yet she's fine with who she is. She likes most everything about herself and even when she dips into self-conscious worrying, she doesn't stay there long because Josie is a fighter. Her weapons are a smile and a friendly and caring attitude that soothes and calms the people around her, in her personal life as well as in her work - except when she's around Dr. Hayes.

Dr. Hayes is totally thrown by Josie from the very beginning and his POV sheds light on how all the little innocent things Josie does warps and twists in his brain to leave him in a lust filled fog. The flame is lit in the first chapter, the heat pours on in the second chapter and there's no going back. Houston's a man driven to distraction and for a man who likes control, he's a panting puppy in Josie's wake - and he doesn't like it --not one little bit. Of course I knew what was coming, what brilliant plan Houston would come up with to fix the situation and I wasn't disappointed. It was funny and hot and quite explosive. Ms. McCarthy puts her unique stamp on the scene and it's memorable.

There are a few secondary characters that help provide insight into the main characters but there is one, Sara, who I am very interested in. There was enough information about her character for me to not only get a connection to but to hope for her to have her own story.

Also, get ready for Houston and Josie finally exploring their attraction; it's hot, sensual, it's passionately furious and a delight when it all comes together. Even when the HEA is getting ready to wrap up, Ms McCarthy imbues the moment with tender humor and further proof that theirs is an indisputable true love. I have no doubts that the love between Josie and Houston will weather many a storm and those two will have many happy decades together. After you read it, I bet you'll agree and I also bet you'll be smiling.

Edited to add: Congratulations to today's winner: Limecello!!
Posted by The Long and the Short of It Reviews at 3:52 PM