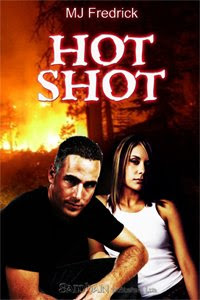 Their passion rivals the fires they battle.

Peyton Michaels expected her assignment to be simple—write an article about everyday heroes. Heroes like Hot Shot firefighter Gabe Cooper. She never expected to find herself running up a mountain, a wildfire nipping at her heels, her life in his hands.

And she never expected to be drawn to Gabe. After the loss of her husband in the line of duty, the last thing she wants is to fall in love with yet another man who routinely puts his life at risk.

Gabe has had enough of women who want to make him into someone he’s not. Women like his ex, who couldn’t handle the heat of his job. Like Peyton, who sees him as a hero when he’s just a man doing a job. Except time after time, the pesky reporter proves her mettle. And gets deeper under his skin.

But there’s an arsonist at work, and danger is closing in with the speed of a raging brush fire. Peyton and Gabe have to dig deep for what it takes to be a real hero—to find the courage to reach out and grab a forever kind of love. Before it’s too late.

After her husband's death during a SWAT operation gone wrong, a single idea has become the driving goal in journalist Peyton Michaels' life: to discover what makes a hero and what sets such men apart from ordinary citizens. So far, none of the award-winning interviews that garnered her fame have provided even a hint of an answer.

But Cooper doesn't trust journalists to see the truth of what he does. He doesn't talk to them, and he doesn't take rookies on the fire lines. And Peyton's plan involves breaking both rules: taking a rookie firefighter who's also a reporter along on a dangerous mission.

Something makes Gabe pick up the gauntlet.

This fire, however, isn't like any other. It will test everyone involved in the battle, and reveal dark secrets no one wants to know, and truths too unpleasant to face. If Peyton and Gabe survive the inferno, they might find answers to questions they hadn't asked, and a peace they hadn't expected.

MJ.. Frederick knows how to build up suspense with the skill of a seasoned storyteller, even though Hot Shot is only her second published book. The reader cheers for the main characters from the first lines, and the tension between them doesn't abate until the end. Nor is it forced: the author creates a solid background for the characters with enough baggage to keep them apart emotionally throughout the story.

The wildfire at the center of the plot is itself a powerful character. If I didn't know better, I would've sworn that MJ was a firefighter who's experienced forest fires in the mountains. Her research is solid and believable, and doesn't stop at the edge of the burned land. She manages to demonstrate in quick, sharp portraits of minor characters how the fire season affects all the area's inhabitants.

Nor are her antagonists flat and uninteresting. They're worthy opponents for Peyton and Gabe, and... I'll let you discover them for yourselves. Hot Shot reads like a romantic suspense, but is built like a mystery, with clues laid out from the beginning, and bright-red herrings scattered along the way.

This is definitely a must-read. And a re-read. It was a pleasure to discover and it goes straight to my keeper shelf.

Posted by The Long and the Short of It Reviews at 9:51 PM